By mediavigil - March 01, 2014
Note: Arseniy Yatsenyuk who wants European Union membership for Ukraine assumed the office of Prime Minister of Ukraine 27 February 2014. a decision on Ukraine's membership of NATO and other military alliances are according to Yatsenyuk only possible through a referendum. He is loyal to Yulia Tymoshenko, and former prime minister who is the presidential candidate. Yatsenyuk who led Yulia's party during her imprisonment of Yulia when she was jailed for seven years have been made the Prime Minister of Ukraine. "It's comfortable for us to work with Tymoshenko's government," Vladimir Putin once said. 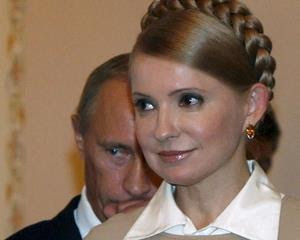 Ukraine's Iron Lady Yulia Tymoshenko was freed on February 22 and is all set to become Ukraine’s next president.

Yatsenyuk served in the government of Ukraine as Minister of Economy from 2005 to 2006. subsequently he was Foreign Minister of Ukraine in 2007 and Chairman of the Verkhovna Rada (parliament) from 2007 to 2008. Currently he is one of the leaders of Ukraine's second biggest party All-Ukrainian Union "Fatherland" and leader of the parliamentary faction of "Fatherland". On January 25, 2014, Arseniy Yatsenyuk was offered a Prime Minister's post by President Viktor Yanukovych but he declined citing unmet demands. Yatsenyuk was awarded Cavalier of the Order of Prince Yaroslav the Wise Fifth Class on 7 February 2008 for significant personal contribution to the integration of Ukraine into the World Trade Organization. Will Ukraine's entry into EU and NATO be in the interest of Ukranian people? Oleksander Turchnyov, the acting president has been reported as having predicted that the new government would “have to take unpopular decisions”.

Strained relations between Russia and Ukraine in the wake of regime change in Kiev escalated into open hostility as the new authorities in Kiev accused Moscow of “armed invasion,” while ousted President Victor Yanukovych, speaking from Russia, said “pro-fascist forces” had seized power in Ukraine.

READY TO FIGHT: Ukraine’s ousted President Viktor Yanukovych at a news conference in Rostov-on-Don, a city in southern Russia about 1,000 km from Moscow

Hundreds of armed men, who reportedly were pro-Russian militia, took control of two main airports in Crimea on Friday to prevent “Kiev extremists” from coming to the peninsula to “cause trouble”.
Ukraine’s border officials in Kiev said Russian military had surrounded a Ukrainian coastguard base in Sevastopol, while a Russian warship blocked Ukrainian patrol boats from leaving the Sevastopol harbour.
The Russian Black Sea fleet shares the Soviet-era naval base in Sevastopol with a smaller Ukrainian naval force.
The moves came a day after the Parliament in Crimea, a Ukrainian autonomy with a predominantly Russian population, rejected the authority of new pro-Western leaders in Kiev and voted to hold a referendum on greater independence from Ukraine. The Crimean lawmakers also replaced the region’s Kiev-appointed head of government with Russian politician Sergei Aksyonov, leader of the “Russian Unity” party.
Ukraine’s new Interior Minister Arsen Avakov said the uniformed and well-disciplined men were Russian military, a claim denied by a spokesman for the Russian fleet in Sevastopol. Mr. Avakov denounced the seizure of the airports as an “occupation and armed invasion”.
The Ukrainian Parliament on Friday called for an emergency meeting of the U.N. Security Council to intervene in the crisis in Crimea.
Lawmakers appealed to Russia, the United States and other signatories of the 1994 Budapest Memorandum, which guaranteed Ukraine’s sovereignty and territorial integrity in exchange for its surrender of Soviet-era nuclear weapons.
The Parliament also urged Russia to stop moves seen as “undermining national sovereignty and territorial integrity” of Ukraine and supporting “separatism”.
The Russian Foreign Ministry on Friday turned down Ukraine’s request to conduct emergency consultations on the situation in Crimea on the grounds that the events in Crimea were a “consequence of internal political processes in Ukraine”.
The Russian Parliament is set to debate next week bills that would facilitate rules for foreign territories to join Russia and for Ukrainians to receive Russian citizenship.
Addressing his first press conference after being granted shelter in Russia Mr. Yanukovych said he is still the legitimate President of Ukraine and would “continue his fight for the future of Ukraine”.
Mr. Yanukovych said the West had “cynically deceived” him, as well as the Ukrainian people, when he signed a EU-peace deal with the opposition, but power was seized by “pro-fascist forces” and “radical mobsters”.
Mr. Yanukovych expressed understanding for Crimea’s revolt against the “usurpers” in Kiev, but said Crimea must not break away from Ukraine. He supported Russia’s involvement in the Ukrainian crisis, but “categorically” opposed “an invasion of Ukraine and violation of its integrity”.
“Russia needs to use all of the leverage it has to prevent, the terror, that is unfolding in Ukraine,” the fugitive Ukrainian leader said.