Showing posts from June, 2013
Show all

A Scene in 2020...Biometric Aadhaar number

Bully tactics? In a very unusual move to put it mildly the Times Group sent a legal notice to the journalist who wrote the piece but not the newspaper which published it. A HOOT comment on the litigious media leader. Pix: the defamation notice sent to Aparajita Lath Posted/Updated Sunday, May 26 01:40:58, 2013 The owners of Bennett, Coleman and Co like to sue, or at least send out intimidating legal notices.  They do not pick on people their own size unless they feel considerably provoked. When The New Yorker columnist Ken Auletta profiled them last October in a piece called Citizens Jain they were not flattered and sent a long threatening letter charging that his article contained many falsehoods and that he had not spoken to their executives. Says Auletta, “ The New Yorker assigned a factchecker, with my support, to check my piece and found no falsehoods and noted that I spoke with their top executives. Our lawyer sent a le
3 comments
Read more 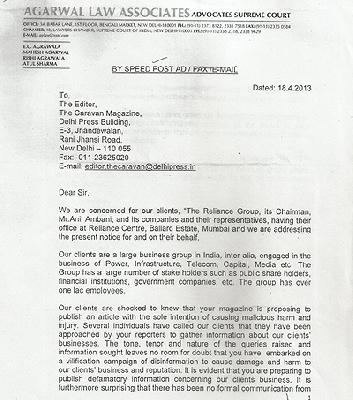