Oct. 22, 2012, New Delhi: Imprisonment of Dr Sunilam, a socialist politician from Madhya Pradesh has been received with a sense of deep concern and dismay as part of a trend to silence voices of public interest by misleading the judiciary to save vested interests. Dr Sunilam has been part of Indian People's Movement against WTO and anti-corruption movement in the country.

At a meeting convened by Indian Social Action Forum (INSAF) over 20 citizen groups and peoples movements, the facts and circumstances related to the conviction and life imprisonment of Dr Sunilam were examined and future action in this regard was planned. The list of participating organizations is attached.

A meeting of eminent citizens and peoples’ movements is planned on October 28, 2012. In a related development, a solidarity meeting is planned in Hyderabad on October 26 at the office of National Alliance Alliance of Peoples’ Movements.
Former legislator and President of Kisan Sangharsh Samiti, Dr Sunilam led Kisan Andolans. On 12 January, 1998 which was a black day for the farmers’ movement of our country, the State Government under the leadership of Digvijay Singh brutally crushed the non-violent farmers’ movement using the state police. Under a big conspiracy, Digvijay Singh misused the State Police that fired bullets and 24 farmers were martyred. In this incident, 150 farmers were injured due to bullet fire.
The farmers of the district Betul had given a memorandum to circle office on 12 December, 1997. In this memorandum they demanded compensation for their damaged crops. But their effort remained unheeded. Again on 18 December 1997 they submitted another memorandum with a short notice, otherwise they would start a big movement for their agricultural losses. Due to inactive conduct of Government officials, the farmers were bound to form “Kisan Sangharsh Samity”. With the formation of this outfit, thousand farmers started indefinite protest (Dharna) against the oppressive Congress regime, in Tehsil Compound.
The state police continued its oppressive attitude towards farmers but on January 9, 1998 around 75000 farmers marched in Betul protested peacefully. The District Magistrate of Betul came forward and proposed compensation of only Rs. 400 per acre. This little amount was too insufficient to hurt the farmers’ sentiments. Again agitated farmers were on the crossroad and on 11th January, 1998 they siege the Multai Tehsil and all 450 villages of this tehsil. It was a historical Bandh, while police administration tried hard to maintain normal traffic. Farmers opposed the intervention of police authorities. In a response police and Congress hooligans fired few buses and in conspiracy police charged some farmer leaders for this arson. On 12th January 1998, farmer’s leader Dr. Sunilam decided to enter in Tehsil but the state police had already ordered to shoot farmers Dr. Sunilam reached Tehsil office and requested again and again to stop such firing but police authority did not heed his request. They were acting on the order of their Chief Minister Digvijay Singh. The whole drama was to annihilate Dr. Sunilam. He was arrested, beaten brutally by police and faced all kind of police torture.
Madhya Pradesh Government had lodged 66 cases on 250 farmers along with their leader Dr. Sunilam. Additional Session Court of Multai will give the verdict in three cases on 18th October, 2012. Today, 14 years have been passed.
Dr. Sunilam is a socialist brave heart farmer leader and a courageous friend of the toiling masses. His struggle for the Madhya Pradesh farmers is a significant struggle after independence. Both, the Congress and the BJP (prominent national parties) came into power and showed their negligence about this Multai incident.
Despite an adversarial State government, in 1998, Dr Sunilam won the legislative assembly seat of Multai, by a margin of 50% votes. He contested this seat as an independent candidate from farmers’ community. He won the Multai assembly seat in 2003, with 60% of polled votes as a candidate of Samajwadi Party. He was made the leader of the Samajwadi Party in the Madhya Pradesh Assembly. Formerly he was the National Secretary of Samajwadi Party.
Taking note of Dr Sunilam’s background, the appeal for supporting him merits endorsement of all the concerned citizens who love democracy and cherish citizen’s liberty.
The meeting also discussed the case of Dayamani Barla who is a journalist turned anti-displacement, tribal, woman activist from Jharkhand as part of a similar trend to harass public interest persons. She was granted bail by a local court of Ranchi on October 18, 2012. But she was arrested again when friends and colleagues of Dayamani reached jail to receive her, they were told that she is been arrested in the Nagadi case and can’t be let off. She was sent to Jail on October 16, 2012 in fourteen days judicial custody, after she surrendered before the court in a matter of April 25, 2006. Six year ago, she was charged under various sections of the Indian Penal Code including Section 148 (rioting, armed with deadly weapon), for participating in a protest demonstration, which blocked the road, demanding job cards for rural laborers under the Mahatma Gandhi National Rural Employment Guarantee Act. She availed bail in to the matter at that time from the concerned police station and the matter was almost closed one. This not the first time when she is intimidated or harassed but the government is leaving no chance to target her. The recent intimidation and arrest is due to her leading a restless, successful and mostly peaceful (except once when police opened fire on villagers) struggle against the acquisition of fertile land at Nagari, a village situated at few kilometers from the state capital and where government wants to build IIM, IIT and National Law School. The government is desperately trying to crush the movement, by hook or crook.
It is not a matter of Dr Sunlam and Dayamani Barla alone. Harassment of activists on fake pretexts and conviction in fabricated cases has become a trend that merits the response of the sane legal, social and political minds to defang the bite of the strategic lawsuit against public participation.
For Details: Ramesh Kr. Sharma, INSAF-Indian Social Action Forum, New Delhi-110016, Ph: 011-26517814, 65663958, 9818111562. Gopal Krishna, Mb: 9818089660. 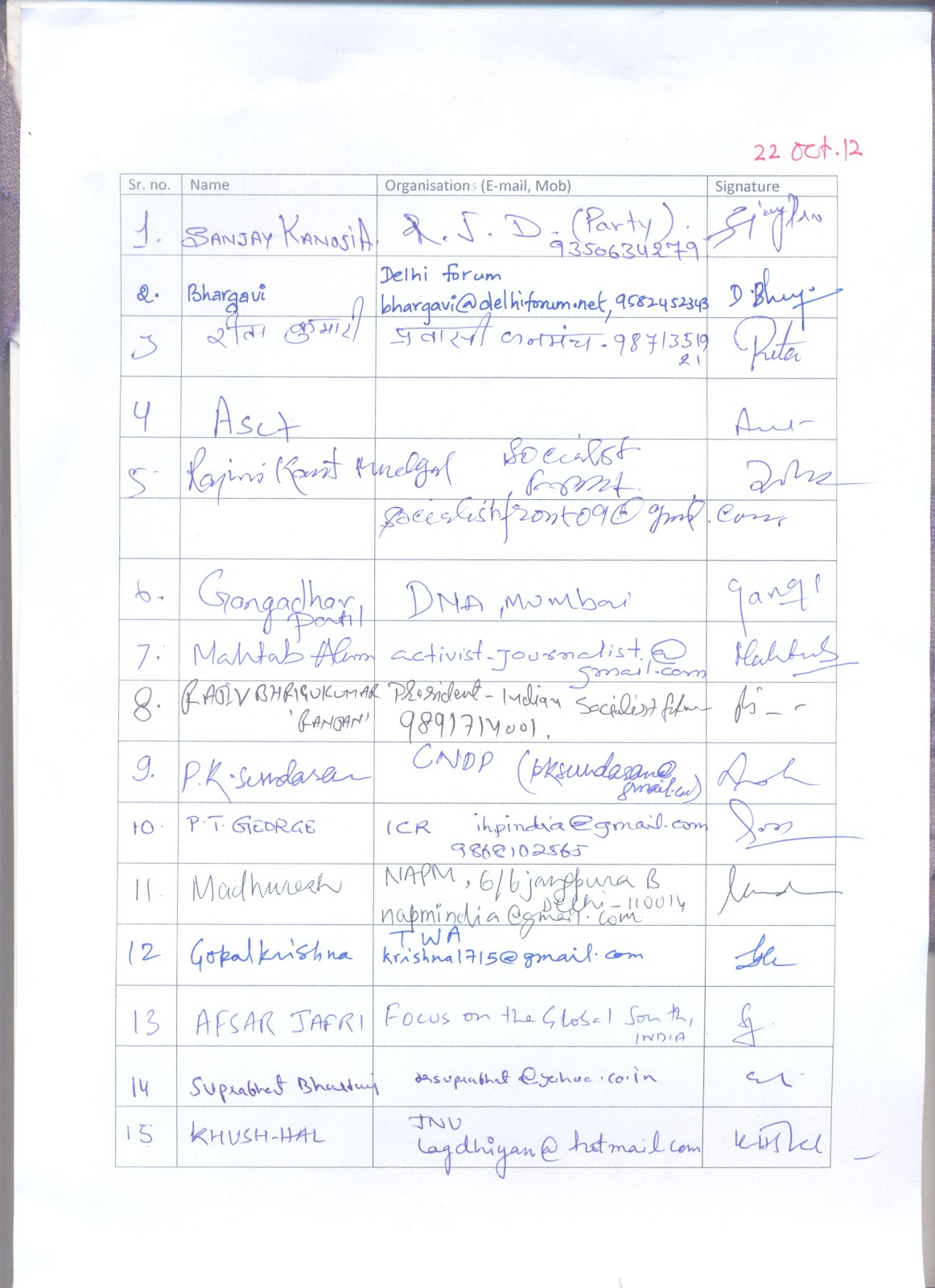 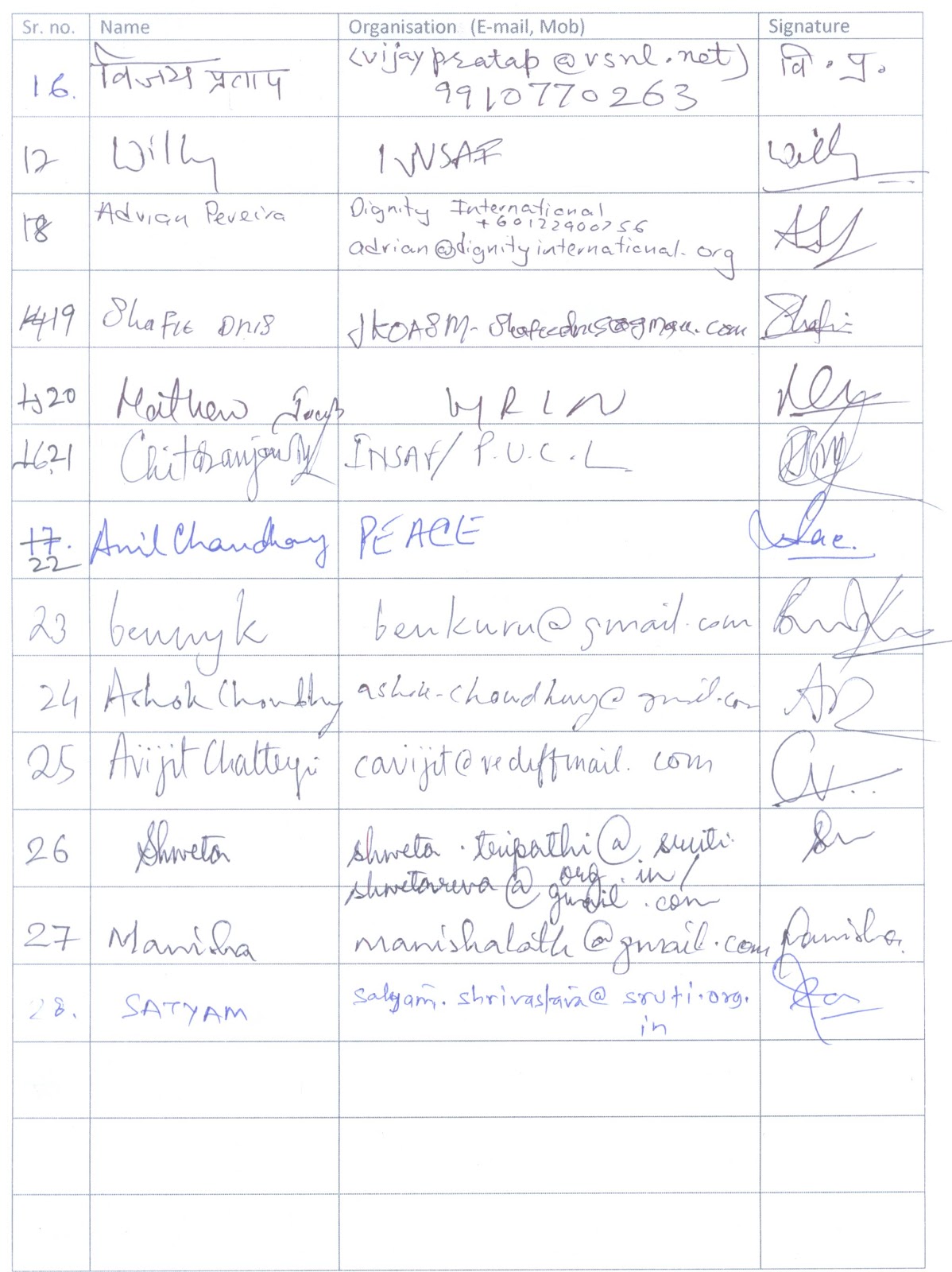