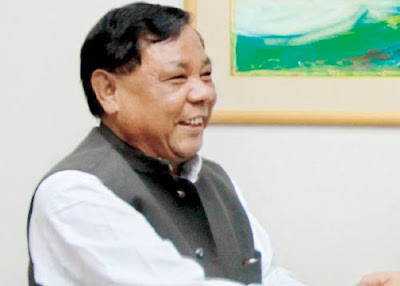 The name of Sangma was chosen from a list of six names forwarded by the tribal MP’s forum. There are 53 tribal MPs in Lok Sabha and Rajya Sabha. Tribals comprise about 8% of the country's population.

Meghalaya leader of the Opposition in the Assembly, Conrad Sangma is leading a full-fedged campaign in support of former Lok Sabha Speaker P A Sangma’s candidature for the post of president. He said there is no whip from the party and it is a conscious decision with the rights bestowed upon each individual MLA’s and MPs to vote a member of their choice to the top post.

He emphasized that Sangma has a stature of a clean politician, free from any corruption after 35 years of performance in active politics speaks for himself and this provides a fresh breath of air. Sangma was in charge of Labour, Coal and Information & Broadcasting ministry, but there is no scandal against him.

President Pratibha Patil's term ends on July 24 and the EC notification with regard to the election is likely to be issued this week itself. The notification for the last Presidential election was issued on June 13. The EC has already started work on the checklist of 41 tasks for the Presidential election. The ruling Congress and the opposition BJP have so far remained silent on the candidature issue, while the former Speaker P A Sangma has already jumped into the race. Finance Minister Pranab Mukherjee is considered as being among the frontrunners for the post.

Sangma was born on 1 September 1947 in village Chapathi in West Garo Hills, Meghalaya.

After completing his graduation in (B.A. (Hons.) from St. Anthony's College, Shillong, he went to Dibrugarh University in Assam for his Masters degree in International Relations. Subsequently, he also obtained a degree in Law (LL.B).

He was expelled from the Indian National Congress on May 20, 1999 for raising the banner of revolt against Sonia Gandhi over her foreign origin issue. He was one of the co-founders of Nationalist Congress Party (NCP).

Sangma created a split in the NCP after Sharad Pawar became close to the NCP's former rival Sonia Gandhi. After losing a battle for the NCP election symbol, Sangma later merged his faction with Mamta Bannerjee's Trinamool Congress, forming the Nationalist Trinamool Congress. In the Lok Sabha elections 2004 Sangma was one of two NTC MPs elected. He resigned from his Lok Sabha seat on October 10, 2005 as a member of All India Trinamool Congress, and was reelected as NCP. candidate on February 2006. He resigned from 14th Lok Sabha in March 2008 and got himself elected in Meghalaya Legislative Assembly.

His son Conrad Sangma, is the Leader of the Opposition in Meghalaya Legislative Assembly.