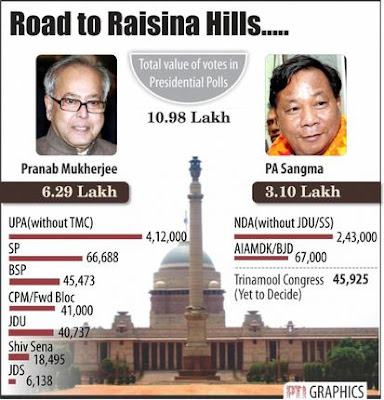 BJP-backed Presidential poll candidate P A Sangma targeted Finance Minister and UPA nominee Pranab Mukherjee for the economic slowdown on June 24. The Presidential election is scheduled to take place on July 19. "If the rupee is at an all time low, if the international rating for credit has been downgraded, (there is) so much of corruption, who is responsible...?" he asked. "The entire corporate world is with Pranab Mukherjee," said Sangma. He is supported by BJP, AIADMK and BJD, was talking to reporters in Amritsazr during a visit to the Golden Temple. "You see individually, it is the Finance Minister who is responsible for price rice, for corruption, for devaluation of money and (the issue of bringing back) blackmoney... collectively the Prime Minister and his cabinet, but individually it is the Finance Minister's responsibility," he said. Sangma, who is pinning hopes on a "conscience vote" and his tribal identity, has virtually dared Mukherjee for a debate ahead of the Presidential poll, saying democracy needs debate on the current economic scenario. Congress has, however, dismissed as a "non-starter" Sangma's challenge to Mukherjee for a debate. "The Constitution does not ordain or mandate that the President of India manages the economy of the country. Therefore, the suggestion for the debate is non sequitur (a statement that does not logically follow the previous statement) and non-starter," Congress spokesperson Manish Tewari has said. A Punjab Government release later said Chief Minister Parkash Singh Badal, during a telephonic conversation with Sangma, assured him SAD's "full support". Sangma said he was "quite hopeful" of his victory since he was enjoying comfortable support from NDA. Besides, many other political parties have given him an assurance to vote in his favour, he said. He also said many political parties having alliance with UPA could vote for him. Sangma maintained that though Mukherjee was enjoying "support of corporate world", he was getting backing of the masses and cited the example of V V Giri, who won the Presidential poll as an independent candidate. This time history could be repeated once again, he said and claimed that all calculations of UPA would be proved baseless. During his visit to the Golden Temple, Sangma was accompanied by his son, BJP Amritsar MP Navjot Singh Sidhu and senior Akali leaders including SAD Rajya Sabha Member Balwinder Bhunder and SAD leader Prem Singh Chandumajra.

felixshelsher said…
Now a days all the ministers are fight to each other for the president. Right now two minister (Pranab Mukherjee and PA sagma)are best claiment to make president. I hope good president will make in india.