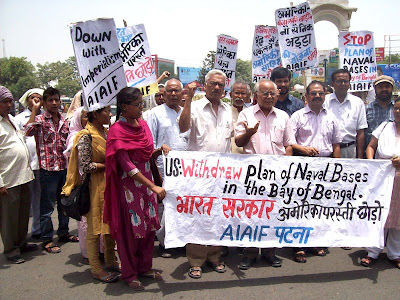 Addressing the march the speakers said that US was making frantic efforts round the globe to establish its hegemony and control over every sphere including maritime water. With Japan, Australia and India, the US was conducting joint naval exercises frequently in Pacific, Indian and other oceans and gulfs to show off its strength. “With the plea of containment of China, United States has planned to set up bases in the Bay of Bengal and multiply its naval presence in the Indian Ocean.

The real aim is to consolidate its military hegemony in South Asia and launch offensives against Iran, Afghanistan and other countries in the Middle East and Central Asia,” said the speakers. Strongly condemning the nefarious war activities of the US Imperialists they urged all the progressive democratic anti-imperialist forces and peace loving people of the state come forward and build up mighty movement to forestall these heinous moves of US and its accomplices.

Pressurizing the Indian Government to give up its pro-US policies and military alliance with the US they demanded the withdrawal of American naval presence in the Bay of Bengal.