Showing posts from November, 2011
Show all

Ist it Pentagon/NATO versus the BRICS? 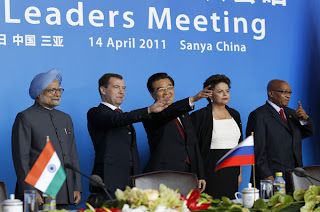 Pepe Escobar Both sides are staking out their territory across the Middle East as BRICS countries warn the West about interventions. Few may have noticed when, last week, US State Department spokeswoman Victoria Nuland cryptically announced that Washington "would cease carrying out certain obligations under the Conventional Armed Forces in Europe (CFE) Treaty with regard to Russia". Translation: Washington will not inform Russia from now on about the redeployment of its global armada. The Pentagon's worldwide "repositioning" strategy is now supposed to be a secret. Some essential background is in order. CFE part one was signed way back in 1990 - when the Warsaw Pact was still in effect, and NATO was supposed to defend the "free" West against what was depicted as a threatening Red Army. CFE part one established a significant reduction of the number of tanks, hardcore artillery, fighter jets and helicopters and that both sides would be cons
Post a Comment
Read more

By Krishna - November 30, 2011
North Atlantic Treaty Organisation (NATO) has not offered to provide ballistic missile shield to India against any possible enemy attacks, Defence Minister A.K. Antony said on November 30. He informed parliament that India has not received any offer from the NATO for a partnership in missile defence programme. In written replies to questions in the Rajya Sabha, he also said that India has also not received any offer from the US for partnering in the F-35 Joint Strike Fighter (JSF) plane programme. Antony was replying to questions whether the NATO was willing to provide India missile cover from enemy attacks, whether the US-led alliance had invited New Delhi to become a partner in its missile defence programme, or whether the US had offered it a partnership in the development of the F-35 combat plane. NATO officials had expressed their inclination to offer India missile defence technology during a chat with a group of Indian reporters visiting the 28-nation military alliance'
Post a Comment
Read more

By Krishna - November 29, 2011
Russia rejects any arms embargo imposed on Syria and Moscow would try to avoid a repeat of the Libyan scenario in the country, Russian Foreign Minister Sergei Lavrov said Tuesday. After his meeting with Arab countries' ambassadors to Russia, Lavrov told a news conference that lessons should be learnt from the situation in Libya, where an embargo on arms supplies was "only applied to the Libyan army." "Groups, including those formed by citizens who penetrated to Syria from other states, have been actively supplied with arms," he said. "That is why proposals to introduce a ban on any arms supplies to Syria are quite unfair." Lavrov said Moscow also rejects ultimatum-like words on the Syria issue, adding that the ultimatums would not help resolve the problem. "The Syrian problem requires the same approach, as ultimatums, which some states try to use, including members of the Arab League, cannot resolve this problem," Lavrov said.
Post a Comment
Read more

NATO attacks cause death of 72 PakistanI soldiers in 3 years

By Krishna - November 29, 2011
Pakistan writes to UN Secretary General asking him to inform UN General Assembly and Security Council Pakistan has formally communicated to the United Nations its protest and condemnation of the NATO airstrike that killed its 24 soldiers and has strained ties between Washington and Islamabad. Pakistan’s Ambassador to the U.N. Abdullah Hussain Haroon has written a letter to U.N. Secretary General Ban Ki-moon informing him of the NATO attack of November 26 “on Pakistan’s border posts (that) resulted in the martyrdom of 24 officers and soldiers of the Pakistani army.” He further wrote in the letter that 13 personnel were also injured in the attack. Mr. Haroon was in Pakistan for the last few weeks and writing the letter, dated November 27 and marked “most urgent”, to the U.N. Chief is understood to have been among the first things he did after returning to New York. Mr. Haroon has also forwarded to the Secretary-General the statement that was issued in Islamabad by the Defence
Post a Comment
Read more

Where Does Occupy Wall Street Go From Here

By mediavigil - November 27, 2011
This past weekend I participated in a four-hour meeting of Occupy Wall Street activists whose job it is to come up with the vision and goals of the movement. It was attended by 40+ people and the discussion was both inspiring and invigorating. Here is what we ended up proposing as the movement’s “vision statement” to the General Assembly of Occupy Wall Street: We Envision: [1] a truly free, democratic, and just society; [2] where we, the people, come together and solve our problems by consensus; [3] where people are encouraged to take personal and collective responsibility and participate in decision making; [4] where we learn to live in harmony and embrace principles of toleration and respect for diversity and the differing views of others; [5] where we secure the civil and human rights of all from violation by tyrannical forces and unjust governments; [6] where political and economic institutions work to benefit all, not just the privileged few; [7] where we provide full and free e
Post a Comment
Read more

140 Rajya Sabha MPs have assets but no financial interests

By mediavigil - November 17, 2011
Congress's T. Subbarami Reddy of Andhra pradesh, with total assets worth Rs.258 crore & who is Chairman, Parliamentary Standing Committee (PSC) on Science & Technology, Environment & Forests claims, he has no financial interests! New Delhi, Nov 17 (IANS) A total of 140 out of the 241 members of the Rajya Sabha claim that they have no financial interests, despite owning assets running into crores of rupees, said an activist Thursday. Prime Minister Manmohan Singh has also declared no financial interests, but has assets worth more than Rs.4 crore. 'It is strange how one can have huge assets and no financial interests,' said Anil Bariwal, national coordinator of National Election Watch (NEW). An analysis of data on MPs' financial interests received from Rajya Sabha by NGOs NEW and Association for Democratic Research (ADR) showed a large number of them having share or control in private firms or enjoying financial gains from firms or other professions.
1 comment
Read more

By mediavigil - November 12, 2011
NPR is not Citizens Register, it’s a Register of Residents like UID/Aadhaar Privacy Bill should precede creation of NPR, RFID & Intelligence Grid Biometric data collection an act of “illegitimate advances of the (police) state” & businesses New Delhi 11/11/2011: Quite like prisoners whose biometric data like finger prints can be collected only under the Identification of Prisoners Act, 1920, it is quite outrageous that National Population Register (NPR) is taking biometric data of every resident and citizen of India disregarding absence of any legislative mandate for it. In the case of prisoners their biometric data is required to be destroyed on their acquittal but in the case of NPR and Centralized Identities Register (CIDR) of Unique Identification (UID)/Aadhaar Number, the same will be recorded for ever. Are residents and citizens worse than prisoners? In a letter to Planning Commission, Citizens Forum for Civil Liberties (CFCL) has drawn their attention towards th
43 comments
Read more
More posts