Showing posts from August, 2011
Show all

By mediavigil - August 22, 2011
To Shri Hamid Ansari, Hon’ble Chairman, Rajya Sabha Parliament of India New Delhi Date:22/08/2011 Subject: Conflict of Interest in the Parliamentary Committee Examining anti-corruption (Lokpal) Bill, 2011, The Judicial Standard and Accountability Bill, 2010 and The Public Interest Disclosure and Protection to Persons Making the Disclosures Bill, 2010 Sir, With reference to the public announcement inviting suggestions on the anti-corruption Lokpal Bill, 2011 by the Parliamentary Standing Committee on Personnel, Public Grievances, Law and Justice, I wish to highlight certain facts that show a clear conflict of interest among some Hon'ble members of this Committee and the sensitive Bill. These members include Dr Abhishek Manu Singhvi , Shri Lalu Prasad, Shri Amar Singh, Shri Manish Tewari and Shri Parimal Nathwani. I submit that Dr. Abhishek Manu Singhvi was nominated to the committee on 26th July, 2011 according to the Rajya Sabha website. I have learnt from a news rel
Post a Comment
Read more

That 1937 feeling all over again

By mediavigil - August 07, 2011
(Reuters) - Federal Reserve Chairman Ben Bernanke, an expert on the Great Depression, once promised that the central bank would never repeat its 1937 mistake of rushing to tighten monetary policy too soon and prolonging an economic slump. He has been true to his word, keeping interest rates near zero since late 2008 and more than tripling the size of the Fed's balance sheet to $2.85 trillion. But cutbacks in government spending may end up having a similarly chilling effect on the economy, and there is little Bernanke can do to counter that. Back in 1937, the U.S. economy had been growing rapidly for three years, thanks in large part to government programs aimed at ending the deep recession that began in 1929. Then the central bank clamped down hard on lending, and federal government spending dropped 10 percent. The economy contracted again in 1938. The jobless rate soared. "Regarding the Great Depression. You're right, we did it. We're very sorry. But thanks to
Post a Comment
Read more

By mediavigil - August 07, 2011
When the big banks screamed "crisis," they were instantly rewarded with trillions of taxpayer money. Likewise, when rich bondholders — some of them bailout beneficiaries — yelled "crisis" at the U.S. debt, they were immediately rewarded with trillions of dollars taken from social programs for the poor. The jobs crisis, however, staggers on with no relief in sight. The recent troubles in the U.S. economy are forcing working people to reexamine their hopes for a recovery, as has been promised to them for years. They will not wait much longer. Knowing that his 2012 election campaign is at stake, Obama plans to at least appear to be doing something. He's not. He is, however, to begin a "listening" bus tour — in crucial electoral states — to hear about the plight of those suffering from the economy. After 4 plus years of mass unemployment you'd imagine that the Obama administration would have a massive, concrete plan to address the issue. He doesn'
Post a Comment
Read more

How the US downgrade will change the global economy

By mediavigil - August 07, 2011
Standard & Poor's decision to strip the United States of its triple-A credit rating, whether we agree with it or not, signals a turning point for the entire global economy. Because of the unique role the U.S. plays in the world economy, a downgrade of the U.S. isn't anything like a downgrade of Greece or Spain. For the last century, and especially since the end of World War II, the modern global economy as we know it was built on top of America, relying on its economic strength as a foundation, and using its currency as the primary tool of world economic discourse. In many ways, the world has benefited greatly from that U.S.-led system. The past half century has seen unprecedented economic integration and poverty alleviation, uplifting hundreds of millions out of destitution on a scale never before witnessed in history. America, simply, has been the economic engine that made the world go around. Now that engine is sputtering, and the potential long-term repercussions are
Post a Comment
Read more

By mediavigil - August 07, 2011
Investors will be anxiously watching when the New York Stock Exchange market opens Monday morning to see what effect Standard and Poor's downgrade of the U.S. credit rating will have on trading. The stock market fell by 7.1 percent last week, before S&P issued its report of the downgrade at the end of the day on Friday. The market fell despite the bill signed into law last Tuesday that allowed the raising of the debt limit to prevent the government from defaulting on its financial obligations, accompanied by a deficit reduction package aimed at trimming $2.1 trillion of deficit spending over the next 10 years. The S&P downgrade of the U.S. government's credit rating from AAA to AA+ set off alarm bells in foreign markets as well, as the news coincided with increased concerns over the economic crisis in Europe. Finance ministers of both the Group of 7 and Group of 20 nations were conferring by phone, Reuters reported, while the governing council of the European Central
Post a Comment
Read more

IMPACT OF U.S. CRISIS OVER INDIA AND THE WORLD

By mediavigil - August 07, 2011
News & Analysis from the Perspective of Capital 1. Industry fears US downgrade will hurt Indian exports 2. Expert views: How will US downgrade impact global markets? 3. The week that was: World markets crash; S&P downgrades US 4. It was our duty to downgrade the US, says S&P 1 Industry fears US downgrade will hurt Indian exports Published on Sat, Aug 06, 2011 at 18:13 | Source : PTI Updated at Sun, Aug 07, 2011 at 11:33 The US crisis, aggravated after the downgrading of its sovereign rating by S&P, could severely affect India on account of a dent in country's exports to the world's largest market, business chambers said today. CII, FICCI, Assocham and FIEO expressed concerns over events in the US economy, one of the biggest markets for Indian merchandise and software exports. The Country's second largest software exporter Infosys 's CEO and MD Kris Gopalakrishnan said, "There are fears of another recession in the US and a debt
Post a Comment
Read more 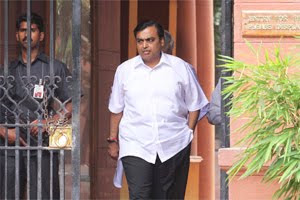 Is the Maharashtra government dillydallying on ordering a CBI inquiry into the issue of the alleged illegal sale of Waqf land to industrialist Mukesh Ambani for his 27- storey ultra luxury home that is worth nearly $ 2 billion? The state government had received a letter from the Union government in June, asking it to consider ' referring' the matter to the premier investigating agency to probe the land deal. The state has, however, not taken any decision on the matter yet. The land deal on Mumbai's posh Altamount Road has been embroiled in a controversy ever since Ambani began building his multistorey residence Antillia. On Monday, the issue was raised in the state assembly by Opposition leader Eknath Khadse. He said the Rs 500- crore plot was shown to have been sold by the Karimbhai Ibrahimbhai Khoja Charitable Trust for just Rs 21 crore. The piece of land was originally reserved for educating children of the Khoja Muslim community. Maharashtra's minority affairs
7 comments
Read more
More posts