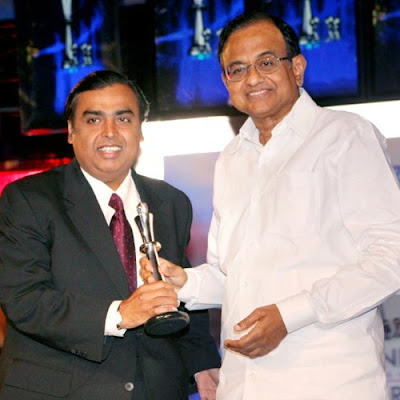 Reliance Industries Ltd (RIL) on June 15, 2011 tendered a "profuse apology" to Home Minister P Chidambaram for remarks by one of its staff purportedly suggesting he was a beneficiary in the 2G spectrum scam. Responding to a legal notice from Chidambaram, RIL Group President V Balasubramanian said in a letter to the Home Minister's lawyer stating that one of its employees K R Raja had in a private telephonic conversation with lobbyist Niira Radia "made certain remarks which were unjustified, unwarranted and derogatory in nature".

Subramanian said that Raja had been severely reprimanded for his "irresponsible and baseless statement". As a corporate entity RIL tendered its "profuse apology" and regretted the incident. Raja, in a separate apology, wrote to the Home Minister's lawyer that during a "private conversation on one-to-one basis" with Radia he had made certain remarks without any basis or justification which were derogatory in nature relating to Chidambaram.

He, therefore, tendered an "unqualified and profound" apology for having made the remarks "in the heat of the moment without realising the implications and without any expectation of the remarks being recorded or coming in public domain". Chidambaram's lawyers had served a notice on Raja demanding an unconditional apology for a conversation between him and Radia which was recorded and carried in the media.

The Home Minister said in a statement that the conversation between Raja and Radia is "reckless and malicious gossip". On the basis of the media reports, the BJP had demanded Chidambaram's resignation alleging he was a beneficiary in the 2G scam. “By this letter, I am tendering my unqualified and profound apology for having made this remark which I realised were without any justification or basis whatsoever and having hurt your client's (Chidambaram's) sentiments and for any harm that may have been cast to your client in this regard," Raja said in the letter.

He said he bore no malice towards Chidambaram and the statement was not made with any deliberate intention to harm his reputation or lower him in the esteem of the general public. “I wish to assure you that these were my personal remarks and do not reflect the position of my employer, M/s Reliance Industries Ltd who as a corporate entity hold your client in very high esteem," Raja said. In his letter, Balasubramanian said as a corporate entity they had always looked upon Chidambaram to provide meaningful leadership and direction to the country and looked forward to his continued contribution to the cause of the nation.

Anonymous said…
For latest information you have to go to see web and on the web I found this web page as a finest
site for most recent updates.