By mediavigil - July 19, 2011
With Rupert Murdoch’s empire engulfed in scandal in the U.K., Michael Tomasky asks whether the trail of wrongdoing could end up consuming the mogul’s many holdings in the U.S.

The question every right-thinking American is asking: Is there any chance, please, that this electrifying Murdoch scandal will spread with full force to America? Pleasing as it is to see Rebekah Brooks arrested, she’s not responsible for helping to ruin my country. So I’m not really feeling it like I would if I had the pleasure of seeing Roger Ailes perp-walked into the Midtown South precinct. Alas, I wouldn’t bet on it spreading (beyond Dow Jones CEO Les Hinton, who resigned last week). Fox News and the New York Post commit innumerable sins, but illegal phone-hacking or some kindred behavior seems to me unlikely to be among them. Still, we can dream. Here are three ways the scandal might come stateside.

First, there are the Dan Cooper allegations. Cooper is a former Fox employee who in 2008 wrote a blog post alleging that Ailes (or someone working for him) sought to harass liberal journalist and founder of Media Matters for America David Brock by securing copies of his telephone records and ensuring that Cooper served as a source for Brock on a story the latter was writing for New York magazine. Cooper also alleges that Ailes called up his agent, Richard Leibner, and demanded Leibner stop representing Cooper, lest audition tapes sent over to Fox by Leibner—the leading TV-personality agent in New York, apparently—mysteriously end up gathering dust. Finally there was a more general allegation that somewhere in the bowels of 1211 Sixth Avenue, the News Corp. building, there is some kind of “black ops” room, where oppo research is done on people Fox doesn’t like. Cooper says he knows because he designed it himself.

These allegations didn’t grow many legs at the time. Last week, Leslie Savan brought them back to life for a blistering piece on The Nation website. Certainly this “black ops” business is tantalizing, and doesn’t seem terribly far-fetched, given what we’ve learned in the past two weeks thanks to the estimable Nick Davies and his colleagues at The Guardian. (Full disclosure: I used to write a political blog for The Guardian.) I’m not sure if the rest quite rises to the level of phone-hacking. Obtaining phone records, the allegation here, would be an honorable or at least defensible journalistic way of getting information in certain contexts—if, say, it helped in exposing a high crime or misdemeanor. That Ailes might have sought to obtain Brock’s phone records because he knew Brock was writing a negative profile of him and wanted to see who was singing to him is thuggish in the way we’ve come to expect from Fox, but it’s probably not the behavior of a crime syndicate masquerading as a news organization, which is what we’re seeing in the U.K.

Second, there’s book editor and publisher Judith Regan. The allegation here is that Ailes ordered Regan, a former employee, to lie to federal investigators to protect the thoroughly corrupt Bernie Kerik, the former New York police commissioner under Rudy Giuliani and then-nominee to head the Department of Homeland Security, who is now in prison. This also seems plausible, but we don’t know and probably never will. Regan has reportedly been paid $10.75 million, and hasn't addressed the specifics in public since. She's said she was contractually owed the money, but it sure looks to me like the payout might have helped make sure we never know the rest of the story.

Third, there is the New York Post, Murdoch’s New York tabloid. Does it operate like The News of the World? Not really. I read the Post closely for many years when I lived in New York, I knew many people who worked there—a lot of them, believe it or not, honorable and honest journalists—and I learned plenty about how it does business. The Post is a protection racket. It decides on its friends and gives them great press. It decides on its enemies and gives them lousy press all the time, and in increasingly inventive ways. Just ask Mickey Rourke, of all people, perhaps the greatest public enemy of Page Six, for whatever reason, during the 1990s.

In politics, the favored rarely are forced to submit to a cross word (and of course the favored are always and have always been Republicans, except for Ed Koch). When former New York Senator Al D’Amato (Rupert’s all-time favorite politician, odd as that may seem) was the target of a scathing Senate ethics report, it was big news everywhere—except in the Post, where you had to have both patience and a microscope to find the coverage.
“The New York Post is a protection racket. It decides on its friends and gives them great press. It decides on its enemies and gives them lousy press, all the time.”

Most comically of all, I will never forget the brief Al-Sharpton-has-been-redeemed interregnum. It was the spring/summer of 1992, and there was a Democratic primary for U.S. Senate to see who would face the vulnerable D’Amato. The front-runner was then-Attorney General Bob Abrams. Sharpton was a candidate in the Democratic primary. Until then, the Post had given Sharpton roughly the same sort of coverage as Yasser Arafat. But now, with Sharpton in a position to make mischief for the Democrat who had the power to take D’Amato down, the Post suddenly saw great merit, I remember, in a “humanitarian” trip the reverend made to Haiti, among other Sharpton pursuits. Of course, this was all well within the rights of a man who buys ink by the barrel, and it wasn’t even a scandal, since one had to be a pretty committed Post Kremlinologist even to notice that sort of thing.

So I doubt the paper breaks the law or conspires with it in blatantly corrupt ways. That’s a British tradition that predates even Rupert, first of all; read up on The News of the World’s role in the bust at Keith Richards’ house, Redlands, in 1967, and how the NotW managed to report it before the police had even made it public. Beyond that, we don’t do checkbook journalism in the U.S., except for the supermarket tabloids, and we don’t have a half-dozen-odd national tabloids desperately competing for readers and resorting to extreme measures. So the odds that the Post has been tapping Democrats’ phones seem long to me.

And in all likelihood Fox’s sins are “merely,” as it were, moral; that is, it is inherently a morally corrupt organization, purporting to stand for truth, justice, and the American way when in fact it’s nothing more than a propaganda outfit. I’d be mildly surprised if legal corruption even occurs to them, they’re so busy pursuing and perfecting the moral kind.

But the delicious thing about the world is that we never know until we know. And given what we’ve learned in these last exhilarating two weeks, well—who knows? 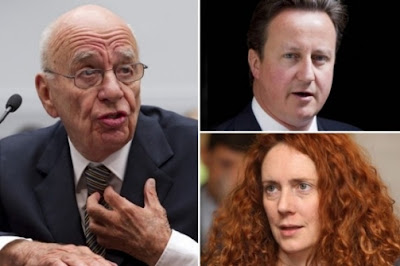 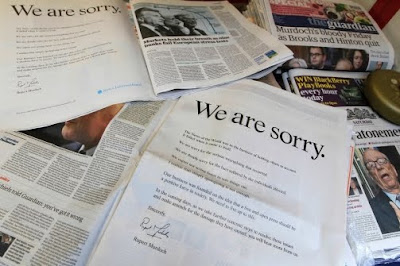