Weapons of GUNs Vs Civil Disobedience in Bahrain

By mediavigil - March 27, 2011
"There weapons are GUNs and our's are Civil Disobedience". The poster has a picture of Gandhi implying peaceful struggle and disobedience. 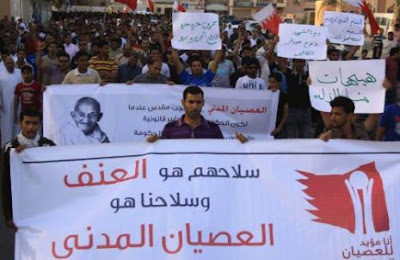 University students held demonstration in front of the Embassy of Saudi Arabia in New Delhi on 28th March, in solidarity with Arab uprising, and against Saudi brutal invasion in Bahrain in the continued presence of Fifth Fleet of US on Friday. The protest was organized under the banner of Indian People's Solidarity with Arab Uprising.

Bahrain has imposed martial law. It has invited troops from Saudi Arabia earlier this month to brutally suppress unrest by pro-democracy protesters. The reporting by western corporate media in general is blatantly communal, divisive and appears to be guided by US and UK foreign policies for it refers to protestors as mostly Shia and Saudi Arabia as Sunni-ruled states. Do these media houses ever report disturbances in the Christian world by designating them as a conflict between catholics and protestents?

Amidst the massacre in Bahrain by the country's ruler, UK Royal family has extended a wedding invitation to King of Bahrain, Hamad bin Issa al-Khalifa. Such gestures are inhuman and condemnable.

On the morning of March 18, government forces destroyed the Pearl Monument, a major landmark of Manama and a meeting point of pro-democracy and anti-monarchy protesters like Tahrir Square of Egyspt. A migrant crane worker was crushed to death by a falling cement arch.

On 14 February 2011, amidst protests in the Ottoman world, demonstrators took to the streets to call for greater political freedoms and an end to discrimination. The protestoers were fired upon by Bahrain's military. The protesters continued to occupy Manama's Pearl Roundabout, the focal point of anti-government protests until the Bahrain government removed the protesters' camp on March 16.

It was erected in 1982 on the occasion of the third summit of the Gulf Cooperation Council. It now being said that traffic lights will be built at the site of Pearl Monument to ease the problems of traffic jams in the financial district.

The state broadcaster BTV that the monument had been "violated" and "desecrated" by the "vile" anti-government protesters, and it had to be "cleansed."

One of the protesters at Embassy of Saudi Arabia in New Delhi from Jawaharlal Nehru University said, “We hail the people's upsurge against US/Saudi puppet dictatorships in Bahrain. The Hamad AL Khalifa’s dictatorial regime is facing an unprecedented challenge from the people of Bahrain and we condemn such type of regimes”.

“This is a historic moment, and all progressive and democratic voices across the world join the protesters in solidarity with not just Bahrain, but several other countries like Libya, Yemen and Saudi Arabia where people are now revolting against anti-people puppet regimes supported by the US,” said Saira Mujtaba, a student of Jamia Millia Islamia.

After protest a delegation of the students met Saudi officials and submitted their resolution demanding complete withdrawal of Saudi forces from Bahrain and Yemen.

It is to be noted that the Hamad AL Khalifa regime, which has consistently been backed by the US, Israel and Saudi Arab, is facing an unprecedented challenge from the people of Bahrain. People are braving tear gas, water cannons, rubber bullets and truncheons every single day. The regime has also tried to quell the movement by shutting down internet services, a key organizing tool of the protests.

Students, activists of different socio political parties and intellectuals participated in the demonstration.

Bahrain became an independent country in 1971. Bahrain's strategic location in the Persian Gulf remains quite relevent in global poltics. It has faced the rule and influence of the Sumerians, Assyrians, Babylonians, Persians, Portuguese, the Arabs, and the British.

It appears to be the site of Dilmun, a land mentioned in the writings on ancient Iraqi civilizations as a trade partner, source of raw material, copper, and entrepot of the Mesopotamia and the Indus Valley Civilization trade route.

In 1820 Al Khalifa power in Bahrain was buttressed when it entered into a treaty relationship with Britain, which was by then the dominant military power in the Persian Gulf. This treaty granted the Al Khalifa the title of Rulers of Bahrain. It was the first of several treaties including the 1861 Perpetual Truce of Peace and Friendship, which was further revised in 1892 and 1951.

Between 1869 and 1872, the islands came nominally under the authority of the Ottoman Empire in coordination with the British. There is an academic reference to a "pre-eminence" of "artistic Sunni/Bedouin tradition of family rule" in Bahrain.

The country was under the de facto rule of Charles Belgrave, the British advisor to Shaikh Hamad ibn Isa Al-Khalifa (1872-1942). It has been noted that Britain's interest in Bahrain was guided by its concerns about Saudi-Wahabbi and Iranian ambitions.

Oil was discovered in 1932, making Bahrain the first location in the Persian Gulf to have oil wells sunk.

During the IInd World War, Bahrain was with the Allies, declaring war on Germany on September 10, 1939. It was a key base for the Allies to safeguard oil supplies in the Persian Gulf.

It faced Italian air raids on its oil refineries on October 20, 1940 from bases in East Africa. It provided two divisions to join the war in North Africa just before the Second Battle of El Alamein: the First Cavalry, led by General Benjamin Segal, and the Second Infantry, led by General Aaron Landberg. These divisions were mentioned in dispatches in late 1942.

"In March 1965, an uprising broke out, called the March Intifada, against the British presence in Bahrain. The spark of the riots was the laying off of hundreds of Bahraini workers at the Bahrain Petroleum Company."

In teh aftermath of IInd World War, Bahrain became the centre for British administration of the lower Persian Gulf.

In 1968, when the British Government announced its decision to end the treaty relationships with the Persian Gulf sheikdoms, Bahrain joined with Qatar and the seven Trucial States (which now form the United Arab Emirates) under British protection in an effort to form a union of Arab emirates. Such efforts did not succeed.

Bahrain sought independence as a separate entity declaring independence on August 15, 1971. It became formally independent as the State of Bahrain on December 16, 1971.

At independence, the permanent Royal Navy presence in Bahrain ended and the United States Navy moved onto the 10 acres previously occupied by British operations. The installation later grew into Naval Support Activity Bahrain, headquarters for the Fifth Fleet of US.

Bahrain emerged just as the price of oil sky rocketed after the 1973 Arab-Israeli war.

A new constitution was adopted. Bahraini men elected its first National Assembly in 1973 (although Article 43 of the 1973 Constitution states that the Assembly is to be elected by "universal suffrage", the conditional clause "in accordance with the provisions of the electoral law" allowed the regime to prevent women from participating).

The Assembly and the then emir Isa ibn Salman al-Khalifa had great differences over issues such as foreign policy; the presence of Fifth Fleet of US, and the budget.

The biggest political crisis came over the State Security Law (SSL). The Assembly refused to ratify the government-sponsored law, which allowed, among other things, the arrest and detention of people for up to three years, (renewable) without a trial.

The legislative stalemate over this act created a public crisis, and on August 25, 1975, the emir dissolved the Assembly.

Iran's Ayatollah Khomeini took note of his co-religionists in Bahrain. In 1981, the Islamic Front for the Liberation of Bahrain attempted to provide a poltical challenge and opposition to the existing political system without success. This and the outbreak of the Iran–Iraq War led to the formation of the Gulf Cooperation Council. Bahrain joined with Kuwait, Oman, Qatar, Saudi Arabia and the United Arab Emirates.

There was an uprising in 1994. The majority Shia population of Bahrain has a grievance against the Al Khalifa rulers because of discrimination.

A group consisting mainly of clerics and businessmen led by Islamist leader Abdul Amir Al Jamri, drew up two petitions that were then signed by Shia, Sunni and secular nationalist individuals seeking reforms such as restoration of the National Assembly and the constitution of 1975. The regime arrested several of the leading Shia clerics who were organising the petition, including Ali Salman to pre-empt the delivery of the petition to the emir.

Bahrain ruler supported military action against the Taliban in 2001. He opposed the invasion of Iraq. International Court of Justice in The Hague resolved the border dispute with its neighbour Qatar over the Hawar Islands in 2001. Bahrain signed a free trade agreement with the US in 2004 even as Fifth Fleet of US continues to be present in the country.

Qatar and Bahrain have made plans to build the Qatar-Bahrain Friendship Bridge to link the countries across the Persian Gulf, which would be the longest fixed-link bridge in the world if completed.