By mediavigil - December 10, 2010
Note: “In exercise of the powers conferred by clause (1) of Article 352 of the Constitution, I, Fakhruddin Ali Ahmed, President of India, by this Proclamation declare that a grave emergency exists whereby the security of India is threatened by internal disturbances.” Published in The Gazette Of  India (Extraordinary), Part II -  Section  3 - Sub-Section (I) No. II/16013/1/75-S&P (D.II) Government Of India, Ministry Of Home Affairs, New Delhi 110001, 26th June, 1975
Text of Indira Gandhi's speech from All India Radio (AIR), New Delhi, June 26,1975
Indira Gandhi’s morning-after speech on national radio declaring the  emergency betrays a harking for the old  system of stable identification and expectations and hints that what had been done was done largely because of a perceived breach therein: “The President has proclaimed emergency. There is nothing to worry about. All manner of false allegations have been hurled at me.” She continued, “The Indian people have known me since my childhood. All my life has been the service of our people. This is not a personal matter. It is not important whether I remain Prime Minister or not. However, the institution of Prime Minister is  important and the political attempt to denigrate it is not in the interest of democracy or of the nation.”
Emergency papers found, minus Indira signature
NEW DELHI: Six months after pleading ignorance about their whereabouts, the National Archives have come up with records of the infamous Emergency. Tell-tale gaps in the information though could well have been responsible for the delayed disclosure about a phase that the present rulers have much to be embarrassed about.

The original paperwork related to the proclamation of Emergency on June 25, 1975 and its draconian enforcement for 21 months has come into public domain thanks to the tenacity of RTI applicant M G Devasahayam, who had Jayaprakash Narayan in his custody for six months as the then deputy commissioner of Chandigarh.

Though his application was shunted from the Prime Minister's Office to the home ministry and then to the National Archives, what forced the authorities to give up their blocking tactics was Devasahayam's recourse to a complaint under RTI as that could have had penal consequences for those denying information.

The reams of documents given to Devasahayam betray extraordinary attempts to distance Indira Gandhi from much of the illegal decisions responsible for Emergency and its excesses. Though the signatures of other dramatis personae, President Fakhruddin Ali Ahmed downwards, are available on the Emergency records, there is none of Indira Gandhi herself in any of them.

The omission of Indira Gandhi's signature is most glaring in the file relating to the manner in which she had bypassed the Cabinet while asking Ahmed to sign the Emergency proclamation late in the night on June 25, 1975.
While the original proclamation bearing Ahmed's signature is available, there is only a typed copy of the PM's ''top secret'' letter that had recommended imposition of Emergency under Article 352 of the Constitution.

According to the file, the copy of Indira Gandhi's historic letter was obtained by the home ministry from the President's Secretariat. The original letter signed by Indira Gandhi was probably taken out of the file at some point and kept away in her personal papers, which are in the control of her family.

Whatever the reason for the missing original, the file nails the claim made by Indira Gandhi in her letter that she had information suggesting that ''there is an imminent danger to the security of India being threatened by internal disturbance.'' The file does not contain a shred of material backing such threat perception on the fateful day.

In fact, the file reveals that the first assessment of the alleged threat of internal disturbance was made more than a fortnight after the imposition of Emergency. It was in the form of a report on the situation before and after June 25, 1975 from the Intelligence Bureau submitted on July 11. This shows that India's hard-fought democracy was suspended on the perception of one individual, without any institutional checks.

The file is a treasure trove for historians as it brings out, among other things, the manner in which the Cabinet gave post-facto approval to Emergency at a meeting held at 6 am on June 26, 1975. It bears out the Shah Commission's finding that none of the Cabinet ministers was privy to the unprecedented decision to impose Emergency. Yet, the Cabinet and bureaucracy without demur facilitated the Emergency measures that followed quickly: imposition of press censorship and draconian amendments to preventive detention laws. 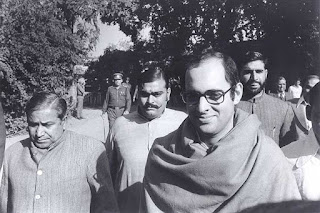 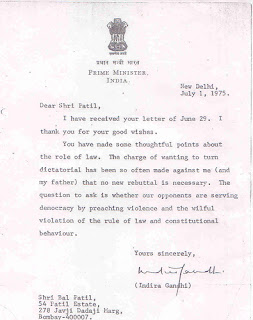