Showing posts from November, 2010
Show all

Why Raja hunted by certain media? 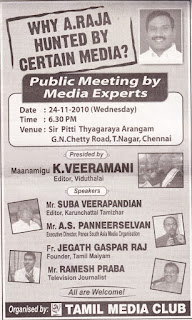 Stupid, it is  a War Between Arya and Dravida!!!! If it is a scandal in United states or in Britain or in neighboring states like Karnataka, Kerala or Andhra Pradesh, it would be a great story for Tamil media. But it happened to be an 'Apna Aadmi ka" scam in telecom. It is total silence in Tamil media except few murmurs in mainstream media. While investigative magazines like Nakkeeran actually defended A.Raja, major newspapers like Dailythanthi and Dinamalar behaved as if a news on A.Raja never existed. The Great Tamil news channel on Earth Sun TV and in its myriad news channels kept showing news of everything on earth except Telecome Scam. Kalaignar Television, owned by Karunanidhi which has a 24 hours news channel also behaved as you know it- the scam never happened. But for Dinamani, The New Indian Express, JayaTV, Junior vikatan, Tamils would never have known about this scam. What is more hilarious is a meeting Organised by Tamil Media Peravai to defend A.R
2 comments
Read more

By mediavigil - November 28, 2010
National Borders compromised with rampant hazardous waste trade   Raja permitted toxic ships with fake flags to enter Indian waters Allowed controversial dead ships like Le Clemenceau, Riky & Blue Lady   A Raja- Nira Radia relationship blossomed during Raja’s tenure as environment Minister which made environmental clearances for Radia’s clients easier since 2006. Radia's influence at Environment Ministry was an open secret.  Actually the roots of the present telecom scam can be back traced to Raja’s incarnation as the environment minister when environmental clearances for projects brought companies across sectors nearer to him. With the assistance of R K Chandolia, then a Director, Planning & Coordination in the Environment Ministry and Radia, clearances were granted at a supersonic speed.  The country is still handling the sins committed by him. Currently, 17,000 explosives weighing 200 quintals are being detonated in Ludhiana, Punjab. These explosives came in 2006 the
1 comment
Read more

New Delhi: Bharatiya Janata Party (BJP) leader and former Telecom Minister Arun Shourie claimed that senior party leader Venkaiah Naidu was lobbied, to ensure the BJP wouldn't oppose 2009 Budget proposals that allegedly favoured billionaire businessman and Reliance Industries Chairman Mukesh Ambani . Shourie confirmed Nira Radia tape revelation to Karan Thapar on 'Devil's Advocate' on CNN-IBN This is the first concrete proof that Nira Radia's influence extended to the Opposition ranks as well. Here's a brief transcript: Karan Thapar : Let's start with the Nira Radia tapes, you yourself are a subject of discussion. The voice speaking to Nira Radia reveals that he has arranged for you to be replaced by Venkaiah Naidu as the lead speaker from the BJP side in the Rajya Sabha on the 2009 Budget. Let me first ask you did this actually happen? Arun Shourie : Yes, there is no doubt in that. I was asked to open the debate on the budget, I worked for one
6 comments
Read more 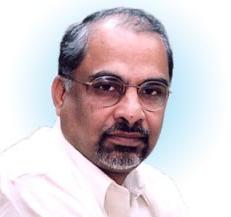 Just say sorry! At a time when many publishers are doing things to destroy the credibility of media, that is what Vir Sanghvi and Barkha Dutt owe to their profession T N Ninan Oscar Wilde observed that journalists are always apologising in private for what they write about you in public. After the Radia tapes, you could say the opposite: that some journalists are being forced to explain (not apologise, though) in public for what they said or did in private. Wilde was talking of journalists who wrote against the movers and shakers but still tried to maintain relationships with them; now, it would seem, some leading journalists write or act on behalf of the movers and shakers. One shouldn’t get too moralistic, perhaps, since every profession has always had its share of bad eggs, and journalism is no exception. But the rule for A Raja and Ashok Chavan, just as much for those in any profession, has to be that if you get caught, you should pay the price, or at least do penance. What
2 comments
Read more 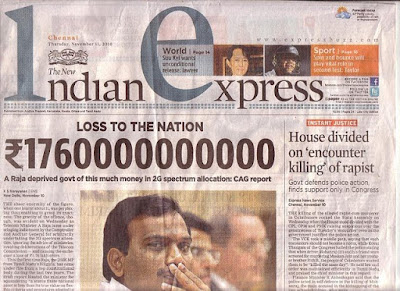 Opposition rejects the Parliament’s Public Accounts Committee proposal The stalemate between the UPA government and the opposition parties over a Joint Parliamentary Committee (JPC) on the 2G spectrum scam failed to make headway. In the all-party meeting, Finance Minister Pranab Mukherjee had offered to attach five officials from various probe agencies of the government to Parliament’s Public Accounts Committee (PAC). But an adamant opposition flatly rejected the proposal and consolidated behind the demand for a JPC. The PAC is currently scrutinising the CAG report on 2G spectrum allocations and the attachment of these agencies – including representatives from the police and CBI – could provide an added dimension to the PAC’s work. Mukherjee had also suggested that while a JPC would be headed by a Congressman, the PAC was headed by a leading member of the Opposition, Murli Manohar Joshi of the BJP. However, his reasoning found no takers. As Prime Minister Manmohan Singh was out o
4 comments
Read more

UID//Aadhaar Scheme is Against Civil Liberties

By mediavigil - November 22, 2010
To Shri Oscar Fernandes Chairperson & Members Parliamentary Standing Committee on Human Resources New Delhi Through Deputy Secretary Parliamentary Standing Committee on Human Resources Subject-UID//Aadhaar Scheme is Against Civil Liberties Sir, This is with reference to the memorandum of understanding (MoU) between Ministry of Human Resource Development and the Unique Identification Authority of India (UIDAI) on 27 October, 2010. Given grave concerns voiced by eminent citizens and experts with impeccable records, we express our opposition to the signing of MoU between Ministry of Human Resource Development and the UIDAI. The MoU is aimed at tracking student's mobility by creating an electronic registry of all students, right from primary and elementary level to secondary and higher education. The fact that this would entail iris scanning for children aged between 5 and 15, while finger print marks would be added subsequently is highly invasive for it is act of profiling
Post a Comment
Read more
More posts