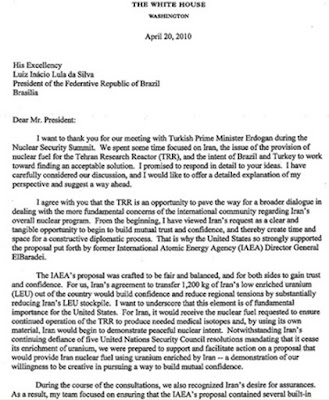 The Obama administration is dismissing as “selective leaking” the leak to a Brazilian website of a letter from President Barack Obama to Brazilian President Luiz Inacio Lula da Silva setting out conditions for a possible Iranian fuel swap deal.

In the April 20 letter, which the White House did not dispute Obama sent, Obama thanks Brazilian President Lula for meeting with him and Turkish Prime Minister Recep Tayyip Erdogan on the sidelines of Obama’s Nuclear Security Summit about a possible confidence building measure with Iran. Under the deal, Iran would sent 1,200 kilograms of its low enriched uranium to Turkey, in exchange for Iran receiving in one year of highly enriched nuclear fuel cells that can be used to fuel the Tehran Research Reactor, to provide the country’s nuclear medicine.

While Oama expresses skepticism in the letter about Iran's willingness to send its uranium abroad and its motivations for pursuing negotiations with Brazil and Turkey after rejecting a similar deal put forward by the International Atomic Energy Agency last fall, he also appears to put forward terms for an acceptable fuel swap deal that are very similar to those in an agreement that the Brazilians and Turks signed with Iran earlier this month and which the U.S., European allies and Russia rejected as insufficient.

Some advocates of increased engagement with Iran have seized on the letter as evidence that the U.S. is "changing the goal posts" in what it is demanding of Iran for it to avoid increased international sanctions, a point the Obama administration dismissed. But the leak of the letter is also a sign of Brazilian resentment that what it sees as its diplomatic triumph has been snubbed by the United States and other traditional great powers. And it comes as Obama released his new national security strategy Thursday, which emphasizes his vision for working in greater partnership with emerging international powers such as Brazil.

In the letter, published by Brazilian foreign affairs website Politica Externa Brasileira and reposted yesterday by Hillary Mann and Flynt Leverett, Obama also makes no apparent mention of a demand that Iran halt the 20 percent higher enrichment work that it began in February. Iran had said it was forced to undertake the higher enrichment to supply the Tehran Research Reactor which provides the country's nuclear medicine. But while the deal struck by Turkey, Brazil and Iran on May 17 would provide Iran with the higher enriched fuel from abroad for that purpose, it makes no mention of Iran halting its higher enrichment work. Some members of the international community fear Iran's insistence on higher enriching uranium for medical needs is a cover for Iran to get closer to having the fissile material for a nuclear weapon.

“There is a potentially important compromise that has already been offered,” Obama wrote Lula. “Last November, the IAEA conveyed to Iran our offer to allow Iran to ship its 1,200 kg of LEU to a third country — specifically Turkey·— at the outset of the process·to be held 'in escrow' as a guarantee during the fuel production process that Iran would get back its uranium if we failed to deliver the fuel.”

But, Obama continues, “Iran has never pursued the ‘escrow’ compromise and has provided no credible explanation for its rejection. I believe that this raises real questions about Iran’s nuclear intentions, if Iran is unwilling to accept an offer to demonstrate that its LEU is for peaceful, civilian purposes. I would urge Brazil to impress upon Iran the opportunity presented by this offer to "escrow" its uranium in Turkey while the nuclear fuel is being produced.”

“Throughout this process, instead of building confidence, Iran has undermined confidence in the way it has approached this opportunity,” Obama continued, in the letter, previously reported on by Hilary and Flynt Leverett. “That is why I question whether Iran is prepared to engage Brazil in good faith, and why I cautioned you during our meeting.”

Obama also writes Lula that "we will pursue sanctions on the timeline that I have outlined," while leaving the "door open to engagement with Iran."

Though Iran agreed in the May 17 deal with Brazil and Turkey to send 1,200 kg of its low-enriched uranium to Turkey, the U.S. rejected the deal after it was announced, saying it did not address the international community’s concerns about Iran’s nuclear program, including the fact that it did not call for Iran to halt its higher enrichment work, and also failed to remove a sufficient quantity of Iran’s fissile material to remove its nuclear breakout capacity.

In a further sign of rejection of the deal, the Obama administration introduced a new draft Iran sanctions resolution at the United Nations Security Council just one day after it was announced, asserting that the draft resolution had the support of all five permanent members of the Council, including Russia and China.

In response to queries about Obama’s letter to the Brazilian president yesterday, the Obama administration said today it has been in regular contact with Brazil and Turkey and “they should well understand that with no suspension of enrichment to 20 percent, the [Tehran Research Reactor] deal does not amount to much,” a senior administration official told POLITICO Friday.

“The TRR deal was meant to provide Iran the [highly enriched uranium] that it needs to run the reactor so it would not have to enrich it,” the official continued. “There is a simple question, why does Iran have to enrich? Clearly, Iran's actions fail to reassure the international community of a peaceful intent, in fact they do the opposite. They convey an interest in pursuing a nuclear weapon. Therefore, the sanctions track must proceed.”

“The whole point is to get Iran into compliance with the [Nuclear Non-Proliferation Treaty] NPT and prior [UN Security Council] resolutions, and the TRR deal alone does not do that,” the official continued. “Surely the Brazilians and Turks understand that - there have been discussions at multiple levels of our and the international community's concerns.”

Anonymous said…
You completed some good points there. I did a search on the

people will consent with your blog.

Anonymous said…
Hey There. I found your blog using msn. This is a really well written article.
I’ll

be sure to bookmark it and return to read more of your useful information.
Thanks for the

Feel free to surf to my weblog :: mentorportal.dk
3:21 AM

Unknown said…
Hi,No exchange control and freedom of movement of foreign currency. Profits, interest and dividends with company formation in Qatar, capital invested and capital gains from the disposal of shares can be freely remitted abroad with no limitation.Thanks....
3:16 AM