This Man Who is Not News

By mediavigil - April 26, 2010
Even as the corporate media celebrates Mukesh Ambani, India's wealthiest resident (and the world's fifth richest person) who is building Antila, the $2 billion home at about 400,000 square feet on Altamount Road, Mumbai which will be among the world's most expensive homes, at 42 degree Celsius, here is a man lying on the roads of a capital of a country which corporate media will have us believe is World's emerging super power.
http://www.visfot.com/index.php/newsline/3369.html 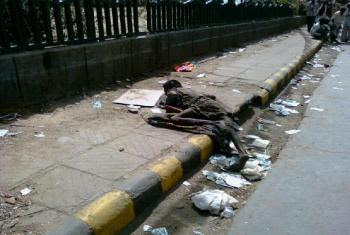 The obvious question is what has these billionaires of India or the world have got do with the man lying on the roads of New Delhi or any other capital city or any place in the world for that matter? Is there a relationship between the two? Keep pondering over it.