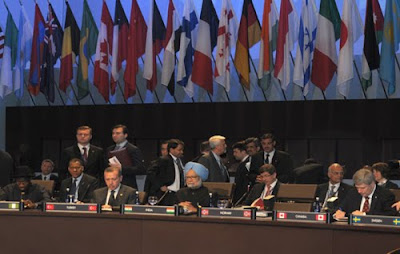 I have concluded my visit to Washington DC for the Nuclear Security Summit.

As I said earlier, India welcomes the initiative taken by President Obama to focus the attention of the international community on nuclear security. This is an important issue for us because without ensuring security we will not be able to harness nuclear energy for our developmental purposes.

We are satisfied with the Communique and Work Plan that have been adopted by the Summit. India participated actively in the preparatory process.

I have announced that India will establish a Global Centre for Nuclear Energy Partnership. This will be owned and managed by the Government, but will be open to international participation in terms of academic exchanges and R and D efforts. This initiative is the next logical step in India's engagement with the world after the opening of international civil nuclear cooperation with India.

India's statement at the Summit outlines our approach to the issues of nuclear security, nuclear terrorism, clandestine proliferation and global disarmament.

After listening to the world leaders at the Summit, I feel a sense of vindication of India's position. The intersection of international terrorism and clandestine proliferation affects our security directly. The concerns that we have been expressing for decades on the dangers of proliferation and risk of nuclear materials finding their way into the wrong hands are today finding widespread acceptance.

When India called for the total elimination of nuclear weapons in the 1950s our voice was not heeded. Today the world is veering around to the vision we had put forward of a world free from nuclear weapons. The world is beginning to see merit in pursuing universal, non-discriminatory and complete nuclear disarmament. We will continue to persevere in our efforts in this direction.

I had fruitful discussions with President Obama on a host of issues relating to our bilateral relations, the regional situation, and the world economy. We look forward to hosting President Obama in India later this year.

My discussions with President Sarkozy, Chancellor Merkel and Prime Minister Harper focused largely on the future role of the G20 in the post-crisis phase of the global economic recovery. I will be visiting Canada for the next G20 Summit in June. I conveyed to President Sarkozy that we are looking forward to his visit later this year to India.