"Nuclear energy for all, Nuclear weapons for none”

By mediavigil - April 14, 2010
Iran says its upcoming denuclearization conference aims to send the message that nuclear weapons have no place in the world — particularly in the Middle East.

"We would continue to send this very strong message from the capital of Iran, Tehran, the center of the Middle East, that nuclear weapons do not have a place at all in this very sensitive part of the world," Mohammad Mehdi Akhoundzadeh, Iran's deputy foreign minister, told Press TV ahead of the international conference on nuclear disarmament scheduled for April 17th and 18th.

Officials from more than 60 countries as well as representatives from various international and non-governmental entities have been invited to the two-day conference dubbed "Nuclear energy for all, Nuclear weapons for none.”

Although the Nuclear Non-proliferation Treaty (NPT) came into effect 40 years ago to curb the spread of nuclear weapons across the globe, the international community was seriously concerned about the existence of thousands of nuclear weapons, which have yet to be dismantled.

Tehran's forum would also discuss issues such as globalization of the NPT, the legal consequences of threatening to use or using nuclear weapons, as well as the need to end discrimination in the implementation of nuclear disarmament treaties. 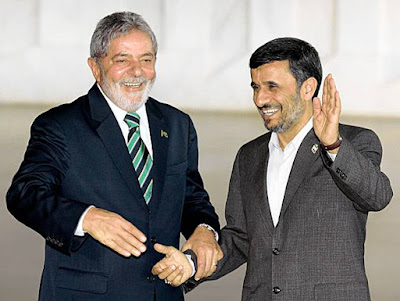 “We can’t admit some countries are armed to their teeth and other ones are disarmed,” Lula told the Spanish newspaper. It is “understandable” that Iran feels threatened by the nuclear weapons of neighboring countries such as Pakistan and Israel, and may consider developing its own, Lula said, according to El Pais.

The Brazilian leader wants to know whether the weapons the two countries agreed to deactivate are not already outdated referring to the nuclear arms-reduction treaty US and Russia signed Medvedev last week.

Brazil has stated that it prefers diplomacy for solving the dispute over Iran's nuclear program rather than tough measures. China, Russia, and many members of the Non-Aligned Movement (NAM), including Brazil, insist that diplomacy must be given a chance.

He also urged the international community to give Tehran "guarantees that it will not be attacked" by the US and its staunch ally Israel.

Iran says the US nuclear threat against the Islamic Republic is a clear violation of the UN Charter.

Brazil says that the world should "analyze Iran's geo-strategic surroundings" with "many nuclear-armed countries."

Brazilian President who is scheduled to visit Iran in May, is also attending the nuclear summit.

Indian Prime Minister Manmohan Singh on April 13 at a press conference in Washington said that he had told US President Barack Obama that India does not favour Iran’s nuclear weapons ambitions but sanctions were not an answer to it as poor people get affected more than the ruling establishment. “I said to the President that we do not favour Iran’s nuclear weapons ambitions,” Dr. Singh told a press conference here when asked about the discussions on Iran that he had with Obama two days back. 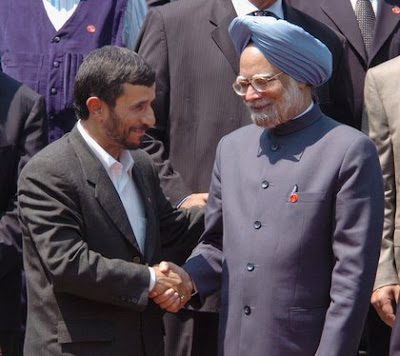 Singh said he had told Obama that as a signatory to the NPT, Iran is entitled to all the rights which the members, who have signed the NPT, have on peaceful uses of atomic energy. “As far as issue of sanctions is concerned, I said to him, that as far as we are concerned, we do not think sanctions really achieve their objectives.
“Very often the poor in the affected country suffer more and as far as the ruling establishments are concerned they are not affected by these sanctions in any meaningful way. Beyond that there was no other discussion,” he said. His comments came amid moves by the US to garner support of world countries, including India, to impose fourth round of UN sanctions on Iran.

Indian Prime Minister said India enjoys good relations with Iran. Asked whether he would be travelling to Tehran to attend a conference organised by Iran next week, Singh said he had no such plans. “I can’t travel at short notice, I have commitment in India,” he said but added that India would be represented at international conference on nuclear disarmament in Iran.

India's decision to depute its ambassador to participate in the upcoming disarmament meet in Tehran has not gone down well with the Iran government.

Sources said Iran expected New Delhi to nominate at least a minister of state or the national security adviser (NSA) for the key meet, which comes close on the heels of the Nuclear Security Summit in the US. The summit is being attended by Prime Minister Manmohan Singh himself.

Iran, along with North Korea, Cuba and Venezuela, were not been invited by the Obama administration.

Though satisfied with India's stand during the talks between the PM and US President Barack Obama on Sunday - India remained opposed to fresh sanctions against Iran for its nuclear programme - Iran is unhappy over the decision to appoint ambassador to Tehran Sanjay Singh for the April 17-18 meet, dubbed 'Nuclear Energy for All, Nuclear Weapon for None'. Iran, isolated by the West over its atomic programme suspected of developing nuclear weapons, has been keen for Indian participation in the conference, which it believes can add some legitimacy to what is widely seen as another tactic to deflect the Western pressure over its nuclear ambitions.

But Iran has decided not to express its displeasure over the matter officially.

The Tehran meet will be attended by ministers, officials and nuclear experts from over 55 countries.

Regarding India's stand at the Indo-US bilateral meet, sources hoped that New Delhi would "walk the talk". Briefing the media following the meet, foreign secretary Nirupama Rao confirmed that the Iran issue had figured during the talks.

"I believe our views are well-known to the US. We have always stressed that Iran has certain obligations to fulfil as a member of the Non- Proliferation Treaty... Also, our position that sanctions when they target ordinary people have always been counter-productive was mentioned by the prime minister," Rao said, indicating the stand of the government whose Iran policy has come under criticism during Singh's regime.

The US had earlier asked India to play a key role in galvanising global support for sanctions against Tehran. But Delhi has maintained that sanctions are not the answer, be it the nuclear issue in Iran or the situation in Myanmar.

India and the US have decided to remain in touch over the Iran issue.

Also, India has consistently advocated dialogue and diplomacy to resolve the issue.

Last November, though India backed an international resolution against Iran over its nuclear programme, it pointed out that it was opposed to "a renewed punitive approach or sanctions" and stressed the need for "keeping doors open for dialogue". That was the third time in the last five years that India voted against Tehran's nuclear programme.