Showing posts from June, 2009
Show all

By mediavigil - June 16, 2009
BRICs is an acronym that refers to the fast growing developing economies of Brazil, Russia, India, and China. The acronym was first coined and prominently used by Goldman Sachs in 2001. Of late BRICs has organized themselves into an economic bloc, or a formal trading association, like the European Union has done and are seeking to form a "political club" or "alliance" to convert "their growing economic power into greater geopolitical clout"

Shanghai Cooperation Organization (SCO) is an intergovernmental mutual-security organization which was founded in 2001 by the leaders of China, Kazakhstan, Kyrgyzstan, Russia, Tajikistan, and Uzbekistan. Except for Uzbekistan, the other countries had been members of the Shanghai Five, founded in 1996.

Departure Statement by the PM Dr Manmohan Singh on his visit to Russia on June 15, 2009 in New Delhi

At the invitation of the President of the Russian Federation, His Excellency Mr. Dmitry Medvedev, I am leaving today to att…
3 comments
Read more

By mediavigil - June 15, 2009
Note: Procedural Establishments Under The Code Of Criminal Procedure, 1973: Section 197 of the Code of Criminal Procedure, 1973 gives protection to a person who is still a Public Servant at the time the prosecution is launched, and also when he is no longer a public servant. This is to protect the Public Servant from a case being filed against him after his retirement. When the government servant or the employee is not removable from his office without the sanction of the Central Government, then the same is necessary. Sanction under this section is not necessary before a Public Servant could be prosecuted for an offence of bribery under Section 161 of the Indian Penal Code, 1860. There are three facets in the consideration of the protection given by Section 197 of the Cr.P.C. to the acts done by public officers. (i) The act complained attaches to it the official character of the person doing it; (ii) The official character or status of the accused gave him an opportunity of doing the…
311 comments
Read more

In China, Bicycles Are Back

By mediavigil - June 12, 2009
Of all the things that have changed in China over the past 30 years, transportation has undergone one of the most obvious of transformations. Where city streets once swarmed with bicycles, they are now full of automobiles. Cars clog intersection and expressways. Their exhaust clouds the sky and the air is full of the sound of horns. But zipping through the congestion is the vanguard of another transportation revolution: vehicles that use no gas, emit no exhaust and are so quiet they can surprise the unwary pedestrian.

In China, electric bicycles are leaving cars in the dust. Last year, Chinese bought 21 million e-bikes, compared with 9.4 million autos. While China now has about 25 million cars on the road, it has four times as many e-bikes. Thanks to government encouragement and a population well versed in riding two wheels to work, the country has become the world's leading market for the cheap, green vehicles, helping to offset some of the harmful effects of the country's aut…
27 comments
Read more

Giving in to prior restraint

By mediavigil - June 08, 2009
Is civil society mounting enough of a fight against the extraordinary powers Mr Raja's ministry is arming itself with? The rules being framed for the IT (Amendment Act) 2008 are ominous, says SEVANTI NINAN

This article is an expanded version of a column which appeared in the Hindu, on June 7, 2009 titled, “In the name of national security”.

After 26/11 when the Information and Broadcasting Ministry tried to come up with sweeping restrictions on TV channels in the interests of national security there was the predictable outcry and the government backed down very quickly.

Why then is there not enough of an outcry when websites are affected, for the same reason? Particularly over the way rules are being framed for the IT (Amendment) Act of 2008? The powers they give the Government to block websites amount to prior restraint, permitting blocking without informing the affected party, or giving him/her a chance to be heard. Obviously it has been done to deal with terrorism, and it cou…
Post a Comment
Read more

By mediavigil - June 06, 2009
Marieme Helie Lucas asks, 'Where are women and secularists of Muslim countries in Obama's speech in Cairo?' (WLUML Networkers/SIAWI)

It is beyond doubt that many people around the world, of various political opinions and creeds, will feel relieved after the speech the President of the USA delivered in Cairo today. It is apparently a new voice, a voice of peace, quite far from Bush's clash of civilisations. But is it so?

I presume that political commentators will point out the fact that Obama equates violence on the part of occupied Palestinians to violence on the part of Israeli colonizers, or that he has not abandoned the idea that the United States should tell the world how to behave and fight for their rights, or that the Israeli-Palestinian conflict is reduced to a religious conflict, or that he still justifies the war in Afghanistan, etc...

All those are important issues that need to be challenged. However, what affects me most, as an Algerian secularist, is that Oba…
Post a Comment
Read more 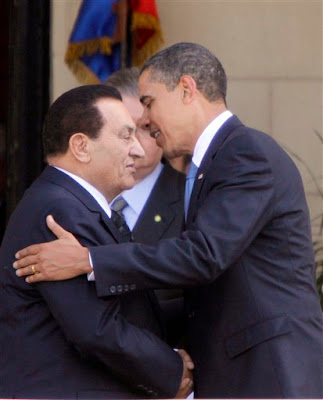 THE WHITE HOUSE
Office of the Press Secretary
(Cairo,Egypt)

________________________________________________
FOR IMMEDIATE RELEASE June 4, 2009
REMARKS BY THE PRESIDENT
ON A NEW BEGINNING Cairo University
Cairo, Egypt
1:10 P.M. (Local)
PRESIDENT OBAMA: Thank you very much. Good afternoon. I am honored to be in the timeless city of Cairo, and to be hosted by two remarkable institutions. For over a thousand years, Al-Azhar has stood as a beacon of Islamic learning; and for over a century, Cairo University has been a source of Egypt's advancement. And together, you represent the harmony between tradition and progress. I'm grateful for your hospitality, and the hospitality of the people of Egypt. And I'm also proud to carry with me the goodwill of the American people, and a greeting of peace from Muslim communities in my country: Assalaamu alaykum. (Applause.)We meet at a time of great tension between the United States and Muslims around the world -- tension roote…
Post a Comment
Read more
More posts