Showing posts from May, 2009
Show all 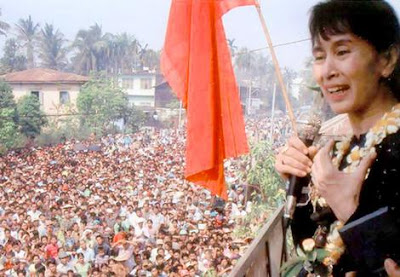 STATEMENT OF SUPPORT FOR RELEASE OF AUNG SAN SUU KYI We, women’s groups, students’ groups, health groups, democratic rights’ groups , civil society organizations and concerned individuals express our deep distress at the recent political developments in Burma . On 14 May 2009, Nobel Laureate Daw Aung San Suu Kyi, 63, who has been under house arrest for 13 of the past 19 years was transferred to the notorious Insein Jail in Rangoon by the Burmese military junta , State Peace and Development Council (SDPC) and is being ttried at special court on trumped-up charges of violating the terms of her house arrest . Her current six-year term under house arrest was to come to an end on 27 May, 2009. Diplomats and journalists are being prevented from attending the trial. Clearly, this is an attempt to preemptively sabotage the election scheduled by the SPDC itself in 2010. It is also an attempt to crush the spirit of Daw Suu and other pro democracy voices from Burma, and persist with
Post a Comment
Read more

By mediavigil - May 17, 2009
Upcoming UN General Assembly's International Conference on the Global Economic and Financial Crisis and its Impact on Development is planned to address the current situation which is constitutes a “ticking time bomb”. The UN is convening a three-day summit of "world leaders" from June 1-3, 2009 at its New York headquarters "to assess the worst global economic downturn since the Great Depression." This august assemblage is entitled the " UN Conference on the World Financial and Economic Crisis and its Impact on Development " (UNCWFECID)। Its worthy aim is to "mitigate the impact of the crisis" and "initiate a needed dialogue on the transformation of the international financial architecture..."The Conference’s outcome document probably would propose something radical on the debt and financial architecture। One reason for hope was that the shock of the crisis had led people to discuss such things openly and to consider solutions tha
Post a Comment
Read more

By mediavigil - May 14, 2009
Unified Communist Party of Nepal-Maoist (UCPN-M)leader and Nepal’s Prime Minister Pushpa Kamal Dahal (Prachanda) announced his resignation on May 4, 2009 after President Ram Baran Yadav of Nepalese Congress party reinstated the army chief Rookmangud Katwal who sacked by him. Nepal's Supreme Court on May 14 issued a show-cause notice to the government on its decision to sack Army Chief Rukmangad Katawal for allegedly defying its orders. A single bench of Justice Bharatraj Upreti issued the order on a writ filed by an advocate demanding to scrap the government's decision to sack Katawal and asked it to reply within 15 days. On May 13, a writ was filed in the court arguing how the decision of Council of Ministers (on May 4) to relieve Katawal from the Army Chief position and appointing Lt. General Kul Bahadur Khadka as the Acting Army Chief was unconstitutional. President Ram Baran Yadav had refused to accept the Cabinet's decision and asked Gen Katawal to remain as the Ar
Post a Comment
Read more
More posts