Showing posts from February, 2009
Show all

By mediavigil - February 18, 2009
Hyderabad, Feb 18 (ANI): A city court in Hyderabad will hear a petition filed by the Securities and Exchange Board of India (SEBI) to question Satyam Computers former Chief Financial Officer, Vadlamani Srinivas and sacked Price Waterhouse auditors S Gopalakrishnan and Talluri Srinivas. On Tuesday, the sixth Additional Chief Metropolitan Magistrate reserved orders for Wednesday after hearing arguments over SEBI's petition. Earlier, the SEBI had interrogated Ramalinga Raju, former chief of embattled Satyam Computer Services Limited, and his brother, Rama Raju. Meanwhile, Minister of Corporate Affairs Prem Chand Gupta said the government has ordered the Central Bureau of Investigation (CBI) to probe the accounting fraud in IT major Satyam Computer Services Ltd. "While the Serious Fraud Investigation Office (SFIO) under his ministry had been given three-months to wrap up its probe into the Satyam scam, no time frame has been set for CBI," Gupta said. He refused to launch
Post a Comment
Read more

Emerging Indo-Iran relations despite US factor

By mediavigil - February 11, 2009
Witnessing the legacy of over 6000 years at an unusual national seminar on “Iran during 30 years of Islamic Revolution” on February 11, 2009 at the Ho Chi Minh conference hall in the Jamia Millia Islamia, New Delhi in Indo-Iran relationship was a crucial occasion. The presence of Seyed Mahdi Nabizadeh, Ambassador of the Islamic Republic of Iran to India at the inaugural session underlined its significance who referred to the Indo-Iran Commission', which was established in 1983. This commission signed seven MoUs in November 2008. He added, "Natural gas from Iran to India through Pakistan is a venture which may change the face of regional politics in South Asia. It should not be characterized solely by economic factors." The highpoint of the relationship came when a path-breaking strategic partnership between India and Iran when Tehran Declaration was signed for enhanced bilateral co-operation in 2001. The declaration was signed by Prime Minister Atal Bihari Vajpayee an
Post a Comment
Read more 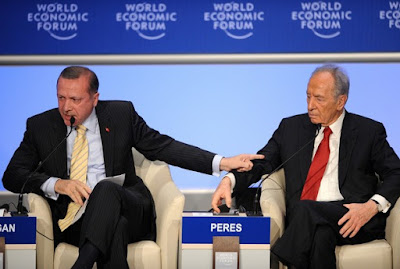 Turkish Prime Minister Recep Tayyip Erdogan (L) talks flanked by Israeli President Shimon Peres during a debate called "Gaza: The Case for Middle East Peace" on the second day of the World Economic Forum in Davos on January 29, 2009. Turkish Prime Minister Recep Tayyip Erdogan stormed out of an impassioned debate with Israeli President Shimon Peres about the Gaza war at the Davos forum. Erdogan said he would not come back to Davos after being cut off by the moderator because of time constraints on the debate. In Davos, Switzerland, Prime Minister Recep Tayyip Erdogan of Turkey walked off the stage after an angry exchange with the Israeli president, Shimon Peres, during a panel discussion on Gaza at the World Economic Forum on 29 January, 2009, and vowed never to return to the annual gathering. Erdogan apparently became incensed after he was prevented by the moderator from responding to remarks by Peres on the recent Israeli attack. The panel was running late and Peres was
Post a Comment
Read more
More posts