Largest investor fraud ever in US: EU reviews fund rules 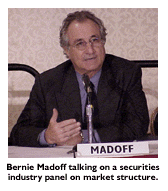 Bernard Lawrence Madoff, an American businessman, and former chairman of the NASDAQ stock exchange who founded the Wall Street firm Bernard L. Madoff Investment Securities LLC in 1960 and was its chairman until December 11, 2008, when he was charged with perpetrating what may be the largest investor fraud ever committed by a single person. He is under house arrest until his indictment with a deadline of February 11, 2009.

On December 10, 2008 Madoff allegedly told his sons, Andrew and Mark, that the asset management arm of his firm was a giant Ponzi scheme--as he put it, "one big lie." They then passed this information to authorities. The following day, Federal Bureau of Investigation agents arrested Madoff and charged him with one count of securities fraud. Five days after his arrest, Madoff's assets and those of the firm were frozen and a receiver was appointed to handle the case. According to federal charges, Madoff himself admitted that his firm has "liabilities of approximately US$50 billion." Banks from outside the U.S. have announced that they have potentially lost billions in U.S. dollars as a result. Some investors, journalists and economists have questioned Madoff's statement that he alone is responsible for the large-scale operation, and investigators are looking to determine if there were others involved in the scheme.

Madoff's firm, which is in the process of liquidation, was one of the top market maker businesses on Wall Street (the sixth-largest in 2008), often functioning as a "third-market" provider that bypassed "specialist" firms and directly executed orders over the counter from retail brokers. The firm also encompassed an investment management and advisory division that is now the focus of the fraud investigation.[9]
Madoff was also a prominent philanthropist who served on the boards of nonprofit institutions, many of which entrusted his firm with their endowments. The freeze of his and his firm's assets significantly affected businesses around the world and a number of charities, some of which, including the Robert I. Lappin Charitable Foundation, the Picower Foundation, and the JEHT Foundation, have been forced to close as a consequence of the fraud.

BRUSSELS, Jan 20 (Reuters) - European Union mutual fund rules may be tightened in light of the Madoff scandal to ensure investors can recover their assets held by custodians, EU diplomats said on Tuesday.

"Developments in the Madoff case have brought to light a particular problem," she said in a letter to the ministers.

Prosecutors say Bernard Madoff of the United States ran a $50 billion Ponzi scheme, paying off earlier investors with money from later ones, in a scam that has devastated investors including European banks.

Lagarde said protection afforded to investors differed from one country to another in the EU due to different ways the UCITS rules were being applied.

The French call is widely seen as an attack on the application of the UCITS rules by neighbouring Luxembourg, a major funds centre in Europe.

"There is no difference between the French and Luxembourg legislation as far as this point is concerned," Luxembourg's prime minister and finance minister, Jean-Claude Juncker, told reporters on Monday evening.

Under EU law, assets in a fund must be entrusted for safekeeping to a depository, which is under strict obligation to return them when requested.

In some EU states, such an obligation has not been made explicit on sub-custodians or banks that are allowed to play the role of custodian, Lagarde said.

"There is a need to harmonise the interpretation of this obligation to reimburse depositors," a French diplomat said on condition of anonymity.

EU Internal Market Commissioner Charlie McCreevy told finance ministers he would not "sit idly by" and would supplement the rules, if needed, his spokesman said.

"If there is a need to supplement the principles or provide greater clarity, the (European) Commission will take the lead and move forward with the necessary actions," the spokesman added.

McCreevy will consult national market watchdogs, in the first instance, before deciding what changes are needed.

The EU has just adopted a reform of UCITS dealing with its fund management aspects.

Lagarde said the Madoff case had "highlighted the difficulty of locating securities, identifying the owners and determining the respective responsibilities to each link in the chain of ownership".

The Commission will propose a draft law at the end of 2009, known as the directive on legal certainty of securities holdings and transactions, as a further step to safeguard investor funds.

Anonymous said…
I found this site using [url=http://google.com]google.com[/url] And i want to thank you for your work. You have done really very good site. Great work, great site! Thank you!