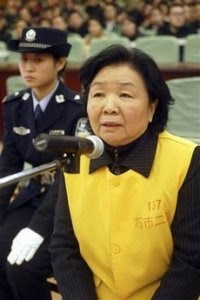 Tian Wenhua, the board chairwoman and general manager of China dairy giant Sanlu Group, has been removed from her posts in the wake of the tainted baby formula milk powder scandal. Tian was also removed from her post as the secretary of the corporation committee of the Communist Party of China (CPC),

China's tainted milk led to the deaths of at least six babies and illnesses of nearly 300,000 others. Tian has pleaded guilty to charges that could lead to the death penalty.

Tian Wenhua, former board chairwoman and general manager of Sanlu Group Co., admitted in court testimony Wednesday that she knew of problems with her company's products for months before informing authorities.

Her trial was the most high-profile yet in a food safety crisis widely seen as a national disgrace, highlighting corporate and official malfeasance.

At least six babies died and nearly 300,000 were sickened by infant formula sold by Sanlu and several other companies that was tainted with the industrial chemical melamine. Middlemen who sell milk to dairy companies were accused of adding water to raw milk, then mixing in nitrogen-rich melamine to fool quality tests for protein content.

Normally used to make plastics and fertilizer, melamine can cause kidney stones and kidney failure when ingested in large amounts. The discovery of melamine in dairy exports such as chocolate and yogurt triggered a slew of product recalls overseas.

Tian pleaded guilty to charges of producing and selling fake or substandard products, the Xinhua News Agency said. Three other executives faced similar charges, and they could be executed if convicted, the China Daily newspaper reported.

The trial opened on December 31, 2008 in the Shijiazhuang Intermediate People's Court and finished Wednesday night but no verdict was announced, said a duty officer at the court who refused to give his name because he was not authorized to speak to the media.

Tian told the court that she learned of consumer complaints about problematic milk in mid-May, and led a company team set up to handle the case, Xinhua said. She told the court she didn't submit a written report on the situation to the government in Shijiazhuang, the northern Chinese city where Sanlu is based, until Aug. 2.

The emerging details showed how news of the contamination slowly emerged over several months, finally becoming public in September.

Sanlu received complaints about its baby formula as early as December 2007, with some parents saying they noticed red sediment in their children's urine, Xinhua said, citing prosecutors.

The complaints reached top executives, such as Tian, in May.

After product testing, the company learned Aug. 1 that its baby formula was contaminated with melamine, Xinhua said, though previous state media reports have said it was as early as June.

Tian's report to local authorities was submitted the next day.

But Sanlu did not issue a public recall until Sept. 11, earning 47.5 million yuan ($6.9 million) in sales of toxic formula between Aug. 2 and the recall, Xinhua said.

News footage from the courtroom showed Tian and her colleagues hanging their heads as they appeared before a three-judge panel.

Defendant Wang Yuliang, a former deputy general manager at Sanlu, was in a wheelchair because he lost use of his legs in a suicide attempt, Xinhua said, without providing specifics.

Seventeen other people linked to the scandal have gone on trial over the past few days, with several facing a possible death sentence. The defendants include people accused of producing melamine and marketing it to milk producers, as well as milk collectors who mixed the chemical into raw milk sold to major dairies. No verdicts have been announced.

The government wants China's many small and poorly regulated food producers to know it is cracking down on shoddy products. Food safety scares in recent years have included eggs colored with industrial dye and seafood laced with unapproved drugs.

In 2007, China executed the director of its food and drug agency for approving fake medicine in exchange for cash. One antibiotic was blamed for causing the deaths of at least 10 people.

Families of children sickened by bad milk have criticized as inadequate a 1.1 billion yuan ($160 million) compensation plan funded by the 22 Chinese dairy companies found to have sold tainted products.