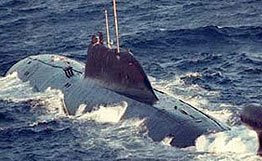 MOSCOW, November 9 (RIA Novosti) - An accident aboard a Russian nuclear submarine in the Pacific Ocean killed 20 and injured another 22 people, a spokesman for Russia's Investigative Committee said on Sunday.

The accident occurred late on Saturday during the sea trials of a nuclear-powered submarine as a result of the unsanctioned activation of the submarine's fire-extinguishing system. The incident is the worst for the Russian navy since the sinking of the Kursk submarine in 2000 when all 118 sailors died.

"According to preliminary information, the incident killed 20 people - 6 sailors and 14 civilians who were aboard the submarine while 22 people received injuries of various gravity," Vladimir Markin said.

Capt. 1st Rank Igor Dygalo, an aide to the Russian Navy commander said on Sunday that 208 people, including 81 service personnel had been onboard the submarine at the time of the incident. He said that the sub's reactor had not been affected and radiation levels were normal.

All the injured had been evacuated on to the Admiral Tributs anti-submarine ship and later taken to hospitals in Vladivostok.

Meanwhile, the submarine arrived at 10:30 a.m. Moscow time (7:30 GMT) at a temporary base in the Primorye Region, Dygalo said.

A high-ranking source in the Pacific Fleet said the accident had occurred in the nose section of the submarine and confirmed that it had not damaged the submarine's reactor.

The Nerpa had started sea trials on October 27.

Meanwhile, Russian investigators said that Freon gas was the cause for the death of people on board the submarine.

Investigators said deadly freon gas killed 20 people on a Russian nuclear-powered submarine Sunday when the fire safety system accidentally kicked in during a sea trial in the Sea of Japan. It was unclear what activated the fire-extinguishing system and the military has launched further investigations, a spokesman for Russia's top investigatory committee, Sergei Markin, was quoted by news agencies as saying.

The system is designed to discharge the Freon gas coolant, which kills instantly, as the most serious of three safety methods to fight fires aboard.

High-ranking Russian officials were cited by Ria-Novosti as saying the system shut down two sections on the bow of the ship they identified as an Akula II class Nerpa attack submarine.

The atomic reactor was undamaged and radiations levels aboard the vessel were normal, a Russian Naval spokesman said early. The submarine has put into port in Russia's Far East near the city of Vladivostok, news agencies said.

Markin added in televised remarks that 14 civilians workers with a ship-building firm and six sailors were killed, citing preliminary information. Another 22 others were hospitalized after being evacuated by a destroyer overnight, he said.

Freon Gas is a chlorofluocarbon.