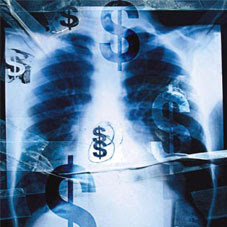 Note:Indian government took an internationally untenable position by opposing the inclusion of Chrysotile Asbestos in the UN's hazardous chemical list under the manifest influence of Asbestos industry and Canadian and Russian governments.

Manmohan Singh government has betrayed the public interest by taking an unpardonable position that endangers each and every citizen of the country at the fourth meeting of the Conference of the Parties (COP-4) of the UN's Rotterdam Convention on the Prior Informed Consent Procedure (PIC) for Certain Hazardous Chemicals and Pesticides in International Trade commenced today at the headquarters of the UN Food and Agriculture Organization (FAO) in Rome, Italy.

There are 39 substances on the Rotterdam Convention's international trade watch list, under which an exporting nation must ensure no substance on the list leaves its territory without the consent of the recipient country. The watch list is formally known as the Prior Informed Consent (PIC) Procedure for Certain Hazardous Chemicals and Pesticides in International Trade.

Chrysotile asbestos, which is widely used in building materials, accounts for some 94 per cent of global asbestos production. The UN World Health Organization (WHO) has identified it as a human carcinogen, and reports that at least 90,000 people die each year of asbestos-related diseases such as lung cancer and mesothelioma. And International Labour Organisation has called for the elimination of its use.

A number of countries, including some that continue to mine and export chrysotile asbestos, blocked its addition to the PIC list when the Parties to the Convention last met in 2006 and further opposition is expected at next week's meeting, according to FAO. India is the largest importers and consumers of Canadian and Russian asbestos to the detriment of its citizens and workers.

Italy born President of Indian National Congress Party, Sonia Gandhi's ruling government headed by Manmohan Singh ignored the appeals by its own Environment & Health Ministry along with trade unions & environmental groups to support the inclusion of Chrysotile Asbestos in the list of hazardous chemicals but Indian officials at the UN meeting in Rome are all set to disregard the public interest concerns and be guided by the industry.

Manmohan Singh government has turned a blind eye towards how the atmosphere around asbestos factory and asbestos products becomes poisonous.

When the matter came for discussion on 28 October, Head of the Indian delegation R H Khawaja, Additional Secretary, Ministry of Environment opposed the listing of Chrysotile asbestos and endosulphan in the PIC list for hazardous chemicals and pesticides. Indian government's delegation acted under tremendous pressure from the representatives of Indian Chemical Industry and Chrysotile asbestos industry who dictated government's official position.

Reacting to the unfortunate position of the government for the fourth time, Ban Asbestos Network of India (BANI) condemned the Indian position and said,
"It clearly illustrates that the ruling Indian National Congress Party politicians are either themselves owners of asbestos companies or are in hand in glove with these companies in their naked lust for profit."

OTTAWA - Chrysotile asbestos will remain off a watch list of dangerous UN chemicals for at least another two years, say observers attending the Rotterdam Convention talks in Rome.

On Tuesday, India, Pakistan, Vietnam and the Philippines made their opposition to chrysotile's inclusion on the list known at the talks.

"Canada got others to do their dirty work for them," said New Democratic MP Pat Martin, who was in Rome as an observer. ''The first speakers were our biggest customers."

Martin said several other countries, like Zimbabwe, Kyrgyzstan and Kazakhstan, also were opposed, but the "overwhelming majority" of delegations were in favour.

"After the four initial speeches, they said, 'There is clearly no consensus, so it was taken off the agenda to be revisited next time,'" he said from Rome.

Martin said the Canadian delegation did not make a speech, but Monday vetoed a Swiss proposal to change the ratification process so that it would only require a three-quarter majority for listing a chemical. To be added to the list, consensus has to be achieved.

Substances on the Prior Informed Consent list are deemed dangerous, and importing countries have to be informed about their hazards.

An independent committee of scientists from around the world had recommended that chrysotile asbestos, endosulfan and tributyltin be added to the list this year.

Endosulfan is a toxic pesticide banned in the European Union, and produced in India, among other places, and tributyltin is an ingredient used in products that are applied to boats to kill marine life. Those chemicals have not been discussed yet.

Kathleen Ruff, of the Rotterdam Convention Alliance, said it is expected that tributyltin will be added to the list because "it is not a commercially valuable substance and so there in not an industry lobby to obstruct the Convention."

Chrysotile asbestos is classified as a known human carcinogen by the International Agency for Research on Cancer, and more than 40 jurisdictions have bans or restrictions on the mineral. There are many countries that still use the mineral, and last year Canada sold $77 million worth of it, mostly to developing countries. At past meetings, Canada had vetoed the addition of chrysotile, saying the mineral can be used safely.

In Rome, Martin was disappointed in the outcome of the discussion, but not hopeless.

"We may have lost Rotterdam, but I think the jig is up for the asbestos industry, now that the public has been made aware of the shameful policies. I don't think the prime minister can ignore the push back of the general public," he said.