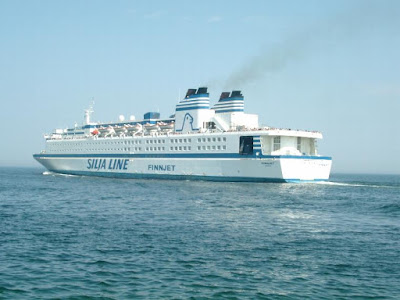 Finnish ship GTS Finnjet (renamed MV Da Vinci, and MV Kingdom) is expected to reach Alang today. It is the fastest conventional ferry with a recorded top speed of 33.5 knots. It was sold for scrap and renamed named MV Kingdom in May 2008 with a price of approximately $ 9.85 million.

Its port of registry is Nassau and us under the flag of Bahamas. Its 212,96 m in length and 25,4 m in breadth. It was build at the ship yard of Wärtsilä, Helsinki, Finland. Its former woners are Cruise Ship Holdings Four Ltd. (2008), Finnjet Bermuda Ltd. (2006-2008), Silja OY (1986-2006) and Finnlines (1977-1986) and MV Cruise Ship Holdings Number Six Ltd. In quick change of hands through proxy buyers, reports suggests that one Jeckon International, Liberia has sold MV Kingdom to an Indian company, Rishi Ship Breakers at Alang.

Also a liquefied natural gas (LNG) named 'LAIETA" built in 1970 is leaving Spanish European waters possibly for the scrap yards in Alang, Bhavnagar, India. The vessel is currently at ALGECIRAS PORT SPAIN. It is due to leave for Alang tomorrow.
GTS Finnjet was a cruise ferry, built in 1977 by Wartsila Helsinki, Finland for Finnlines to ply between Finland and Germany. Finnjet has remained out of service since 2005. Jeckon International, Liberia sold MV Kingdom to Rishi Ship Breakers at Alang and she has completed her final voyage from Jeddah port and is on its way to Alang. 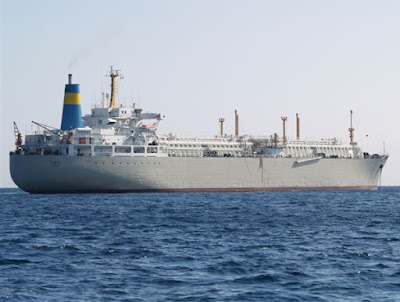 As to LAIETA, the Spanish ship, its home port of this ship is Barcelona. At first this ship was owned by Esso and after passing through other hands it has now been acquired by Del Maritima Norte. The owner of this ship with IMO No. is 6904442 is Del Norte Maritima is a regular liner operator between Spain, Morocco and Northern Europe until now, it has built over 30 vessels. The company is based in Madrid.

The departure of these vessels without pre-cleaning in the country of export is illegal under the international law, European law and under the Indian domestic law.

While the inventory of MV Kingdom is not available, LAIETA has approximately 1200 MT of asbestos on it besides others toxins like PCBs and heavy metals. The export of hazardous wastes laden ships for demolition is prohibited under the Basel Convention. It is for this reason that some 90 ships are languishing at Alang seeking the permission from the Supreme Court of India where the matter is being currently being heard.

It has been 38 years since Spain has built an LNG carrier. The world LNG tanker fleet consisted of 254 vessels at the end of 2007. Laieta did not unload any cargo during the year as well as twelve other LNG tankers that were delivered in 2007.

Laieta is part of a series of four twins, 40,000 cubic meters of capacity, commissioned by Esso for transporting natural gas from Libya to Italy and Spain. Three of them were built in Genoa (Italy) by Italcantieri and east by Astano. They were constructed according to a design itself Esso, different from the rest of vessels engaged in such transport.

Anonymous said…
this is the first we've heard of this, it would put the guy (management) in a very specific position, assigned to the ss norway IMMEDIATELY after the USCG/ntsb inspection...