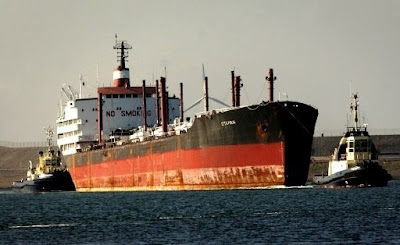 Amsterdam, Netherlands, 16 May 2008. Environmentalists toasted a major victory today as the saga of the controversial ship Otapan finally appears to be coming to a happy ending as it sailed Thursday night cleaned and decontaminated from Amsterdam to the Turkish shipbreaking yards of Aliaga, Turkey near Izmir.

"While there was massive negligence on the part of the ship owners, and a lot of mistakes made by the Dutch government, the result is a precedent-setting success story, that demonstrates that pre-cleaning and compliance with international law and guidelines can be achieved now, today," said Erdem Vardar, Turkish campaigner for the NGO Platform on Shipbreaking(1).

Except for one aborted attempt to dock in Turkey in 2006, the old chemical tanker has spent most of its nine last years in the Netherlands(2) and was the subject of an intense tug-of-war match between government and NGOs. But in the end, following pressure from the NGO Platform on Shipbreaking, the Turkish Prevention of Hazardous Shipbreaking Initiative and Greenpeace Netherlands, the Dutch Ministry of Environment has met the demands of the environmental and development organisations. These demands, which are now being called the "Otapan Principles" (see attached), call for full compliance with the Basel Convention and its decisions on the transboundary movement of wastes, including a requirement to pre-clean vessels of all toxic substances such as asbestos and polychlorinated biphenyls (PCBs) prior to export to countries such as Turkey that have in fact banned the importation of hazardous wastes, or to countries to which the Basel Convention has banned the export of hazardous waste.

The NGOs today called the final voyage of the ship to Turkey a "major victory" and expect that the "Otapan Principles" will serve as a vital precedent and example for the hundreds of ships that are sent for scrapping each year. They foresee that adherence to the Otapan Principles will ensure that developing countries, and poorer communities, do not receive and be forced to work with large quantities of damaging hazardous wastes such as asbestos sent to them as part of the global ship recycling trade.

Otapan will arrive in Turkey around 5 June 2008. Since 2006, the Turkish government has required improvement of their yards following NGO pressure, and the Netherlands agreed to pre-clean the ship when the ship's owner declared bankruptcy. The level of decontamination was accepted by the NGO Platform.(3) In this case, the clean-up operation cost the Netherlands four million Euros, which according to the NGO Platform on Shipbreaking should be paid ultimately by the ship owner -- the Basilisk company based in Mexico.

The NGO Platform on Shipbreaking is calling on all of Europe to follow this Dutch example and make shipowners liable for the breaking of ships. On 20 May 2008 the European Parliament will vote on recommendations for policies that will require European legislation on end-of-life ships. The Platform has made demands that will require institutionalising and operationalising the “Otapan Principles”.

"It is shameful that in this day and age, shipowners continue to ignore their responsibility for their property at the end of its useful life and have turned a blind eye to the plight of the workers that are paying with their lives and health in disastrous beaching operations in countries such as India and Bangladesh," said Ingvild Jenssen, director of the NGO Platform. "We are calling for all governments to take heed of the Otapan precedent and use it as a model for sustainable ship recycling," she said.

(1) The NGO Platform on Shipbreaking is a coalition of 15 various international non-governmental organizations including Greenpeace, Bangladesh Environmental Lawyers Association, Basel Action Network and the International Federation on Human Rights.

(2) The Otapan has a stirring history. Since 1999 the ship was in the Netherlands. In 2001, crew members were caught illegally and dangerously removing asbestos from the ship in the port of Amsterdam. The Dutch ended up seizing the ship. In 2006 the former State Secretary Van Geel gave a permit for export to Turkey. While the ship was on its way to Turkey, Greenpeace Netherlands discovered that the license and the inventory on board listing hazardous wastes was incorrect. The Platform alerted Turkey and the government refused the ship. Despite a special visit to Ankara and an appeal by Van Geel, the Turkish government insisted on a full pre-cleaning and the Otapan came back to the Netherlands.

(3) After the return of the ship from Turkey back to the Netherlands in October of 2006, a proper inventory was made, more samples taken, including sampling for the presence of PCBs, a highly toxic substance, often found on board ships of this age in paint, cables or insulation material. In 2007 the second clean-up took place. Besides 76 tonnes of asbestos and 335 tonnes with asbestos contaminated materials, other toxic materials have been removed from the ship. Now the Otapan contains only 850 kilograms of asbestos, and 331 tonnes of bunker oil which was impossible to remove without completely dismantling the ship. In 2007 the Turkish yard Simsekler received a permit to receive the ship for recycling and will conduct such operations in accordance with the Basel Guidelines on Ship dismantling. Further, the Dutch government has agreed to look for a solution together with Turkey in case a problem further arises while removing the remaining asbestos.

The NGO Platform on Shipbreaking is very pleased to announce the completion of the successful campaign of the ship Otapan. After 7 years of campaigning for proper management and recycling of the Otapan, involving continuous pressure on authorities in the Netherlands and in the Mediterranean region, and two voyages from the Netherlands to Turkey, the Platform, together with participating governments, was able to ensure the implementation of the Basel Convention and demonstrate the viability of pre-cleaning ships.

Implementation of these principles is vital to prevent the environmental injustice that currently sees a majority of the world’s waste ships being dumped and managed in horrific occupational conditions in India, Pakistan and Bangladesh. It is our expectation now that this precedent will be promoted to serve the governments of the world as a working example of how industry and governments can uphold principles of environmental justice and sustainability while properly managing obsolete ships in countries around the world.

I. Pre-Cleaning of Ships Required prior to final voyage: All shipbreaking in countries that have banned imports of hazardous waste (e.g. Turkey) or are not member countries of the Organization for Economic Cooperation and Development (OECD), the European Union and Liechtenstein group should only receive ships that have been pre-cleaned to the extent possible prior to their final voyage for cutting and recycling.

II. Basel Convention Compliance: All transboundary movements of ships must only take place with full compliance of the Basel Convention’s obligations, that inter alia must include the completion of a full accurate inventory of all hazardous wastes in the construction of the ship prior to export; proper notification; and consent received prior to any transboundary movement.

III. ESM: All recycling of ships including the ship recycling facility and all downstream waste management must be demonstrated to be compliant with the Guidelines on ship recycling published by the International Labour Organisation, the Basel Convention, International Maritime Organization and the NGO Platform Green Ship Recycling Standard guaranteeing proper management. Hazardous wastes that are generated as part of the ship recycling should be sent to an OECD country for disposal.


3 Recommendation
We urge all countries and ship owners making decisions about managing end-of-life ships to make use of this precedent and implement these principles in order to put an end to the current global shipbreaking crisis.