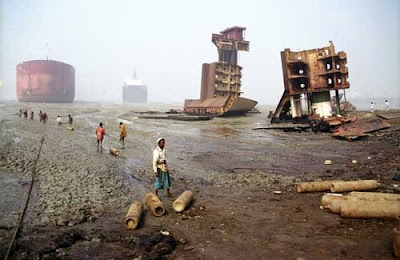 India is a growing market for secondary commodities like ferrous scrap and scrap metal. Ship-breaking industry is part of the scrap metal trade. India represents an emerging market for scrap materials. India imports a high percentage of the scrap material it requires, particularly in aluminum, copper and stainless steel. Many of the old ships bound for salvage and disposal are exported to the Indian subcontinent.


In South Asia, ship-breaking takes place in India, Pakistan and Bangladesh. The workers in this industry are the most vulnerable workforce in the world with high rate of chemical and asbestos exposure. In India, Alang ship-breaking yard is located in Bhavnagar, Gujarat. It is located 288 km northwest of Mumbai. The first vessel – MV KOTA TENJONG was beached at Alang on 13th Feb. 1983. Since then, the yard has witnessed spectacular growth and has emerged as a leading ship Breaking Yard in the world. There are 173 plots to carry out the ship-breaking activities. It provides around 25-30,000 jobs and generates steel totaling to millions of tons every year.It takes from 3 to 12 months to completely scrap a ship, depending on its size and complexity, with most of the work carried out by hand. In its first year of operation, 5 ships were scrapped and by 1997 had the capacity to break up to 300 per year, with up to 300 people working on one boat. The number of accidents and casualties of workers at the yard has attracted global attention.

Gujarat Maritime Board (GMB) as a regulator has been insincere in safeguarding the occupational health and environmental security. It has failed to ensure that all hazardous materials on board the ship are pre-cleaned in the country of export prior to delivery of the ship for dismantling. This amounts to violation of Basel Convention on the control of transboundary movements of hazardous wastes and their disposal. India is a party to the Basel Convention. It signed the Convention on 15th March, 1990, ratified it on 24th June, 1992, and acceded to the Convention on 22nd September, 1992. GMB has failed to invest Rs 500 crore, it has collected from the ship-breakers for the welfare of the workers.

GMB and Gujarat Pollution Control Board (GPCB) has been callous towards the adverse consequences for not only the environment but also for occupational safety and health of the workers. It pretends to be ignorant of the toxic affects to both the local surrounding, environment and society. The established local community relies on basic industries such as fishery and agriculture and is exposed to discharges and emissions to sea, ground and air. Indeed, lack of containment to prevent toxins from entering the food chain is a major concern.

In Pakistan, Gaddani Ship-breaking yard, is located in Gaddani, Lasbela District, Balochistan. It is located 50 km northwest of Karachi. The number of accidents and casualties at this yard is yet to attract global attention. Around 5,000 workers are earning their livelihood at Gaddani dockyard. There is lack of any arrangement for providing even first aid or medical help to the workers.

As of now as many as eight large and medium sized ships have been anchored in Gadani dockyard for breaking during the last five weeks. The country’s ship breaking industry is witnessing a new spell of growth as it is pacing up its productions of steel scraps with the arrival of eight new vessels since beginning of the year at Gaddani beach. The new docked ships include Japanese Shanti and Japanese Pink-1.

The waiver of import duties in Pakistan has encouraged ship breakers to enhance their production while the move of CARe system to advocate industry’s concerns have also boosted their confidence. Pakistan’s ship breaking industry has been facing tough competition with their rival India and Bangladesh on the back of rising prices of ship’s import in the world.Pakistan has advantage over India and Bangladesh as it is close to Dubai ports. Gadani Ship Breaking Industry is being promoted for which tariff and revenue rationalizations incentives have been offered to investors. Investors have held out assurance to start work soon to revive the industry by 2008.

In Bangladesh, shipbreaking yard is located in Chittagong, a highly polluted coastal belt of 20 km. The number of accidents and casualties at the yard is believed to be the highest in the region. In 1965, a 20,000 dead weight tonne (DWT) vessel was driven ashore by devastating tidal waves. It turned out to be the first ship scrapped on the Chittagong beach. Again, in 1970, another major cyclone drove a few ships ashore. These were also scrapped as it was impossible to salvage them en masse. Ships damaged in the 1971 war were also scrapped here. All this scrap fed re-rolling mills. “These events strengthened the idea of breaking ships to get raw materials for iron products and make business with scrap,” says Bishwajit Roy, a Chittagong-based occupational and environmental health expert, in his research on ‘Health problems among the workers in ship breaking industry’.

There are about 30 shipbreaking yards now spread over a 10-sq km area in Chittagong. “Shipbreaking, scrapping and scrap handling are done simultaneously. All the 70 companies are registered as commercial enterprises under the Companies Act, 1913. Only eight shipbreaking yards are registered as factories with the department of inspection for factories and establishment,” says Roy in his research. “Shipbreaking is done in open yards and is not scientifically or technically organised and the management is also primitive. Workers are not protected by sheds and are required to work under open sky round the year in very difficult conditions exposing them to various physical, chemical, biological, mechanical and ergonomical hazards.”

In his survey, Roy found that 94 per cent of the 216 workers surveyed suffered from health problems: musculo-skeletal disorder (87 per cent) topped the list followed by gastrointestinal tract disorders (81 per cent), eye problems (72 per cent), skin diseases (56 per cent), respiratory tract illnesses and different kinds of injuries.

ALANG, India 11 February – The shipbreaking industry in Alang in the state of Gujarat may pose a security threat to the country, an intelligence report leaked to the media says. The report suggests that the D-gang, a group led by Dawood Ibrahim and said to have close ties to Osama bin Laden, is involved in most of the deals going around in the shipbreaking business, the Times of India says on its website, citing the leaked naval intelligence report.

Furthermore, it says, crews on vessels that arrive for scrapping in Alang arrive in India may get ashore without scrutiny. This can lead to clandestine collection of local information and for dropping off or picking up agents.

The industry works via a number of overseas intermediaries. As an example, Blue Lady, the 76,049gt former cruise liner Norway, was 'officially' sold to a Liberian company for a mere $10 before being bought by an Indian company for scrapping at Alang.

"Cash buyers operate hand-in-glove with the end buyers and owners by under-invoicing a deal," the intelligence report is quoted as saying. "The unmentioned amount is transacted through the hawala [an informal, largely Islamic, financial system] route, making almost 40-50% of the metal trade illegal. Apparently, a large number of cash buyers are Pakistani nationals based in London and the UAE. Due to large profit margins, the Dawood group appears to have invested heavily in cash buyers, thus having a stake in most deals," the report warns.

Anonymous said…
I'd be more concerned about what is being smuggled *in* the scrap.
11:12 AM