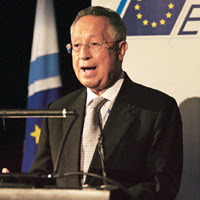 IMO’s new recycling norms will include regulations for the design, construction, operation and preparation (for breaking) of ships

Mumbai: India’s ship-breaking yard at Alang in Gujarat, Asia’s largest, will not have to make any major changes to comply with the proposed ship recycling regulations that are expected to be finalized in 2009, the top official of the International Maritime Organization (IMO) said in an interview.

“The new regime governing ship recycling in India, as recently decreed by the country’s Supreme Court, is remarkably similar to the requirements of the draft text of the new IMO Convention,” said Efthimios E. Mitropoulos, secretary general of IMO. The Supreme Court’s order says that no ship can be beached at Alang unless it is certified “safe” by the concerned authority. Mint reported on 25 January that 53 ships had beached there in violation of this order that was passed in September 2007.

However, the similarity between what India’s apex court ordered and IMO wants “would suggest that there would be no major impediment to India ratifying the new treaty nor does there appear to be any major requirements for the recycling yards in excess of those laid down by the decision of the Supreme Court,” Mitropoulos said in an interview during a visit to Mumbai on Wednesday. “As a result, I believe that India will not have to go a long way to adjust its own legislation to the one that will emerge as a result of the efforts of IMO,” he added.

IMO, Mitropoulos said, was working hard on finalizing the International Convention for the safe and environmentally sound recycling of ships. “We plan to hold a conference in Hong Kong next year,” he said. He added that it was likely that IMO would eventually have an international instrument to regulate the recycling of ships on a worldwide basis.

IMO’s new recycling norms will include regulations for the design, construction, operation and preparation (for breaking) of ships.

This will facilitate safe and environmentally sound recycling, without comprising the safety of ship-breakers or their efficiency. Mitropoulos said the most environment-friendly and sustainable thing to do at the end of a ship’s lifetime is to recycle it.

“Given the right market conditions and a degree of ingenuity, almost everything that goes into the construction of a ship can be reused. Substantial industries have developed not just to dismantle time-expired vessels but also to rework the steel and sell the equipment and furnishings,” Mitropoulos added. However, while the principle of recycling was sound, the working practices and environmental standards in the recycling facilities often “left much to be desired,” he said.

“There is a clear dichotomy within an industry that can, on the one hand, provide a vital boost to local and national economies, yet which, on the other (hand), can produce dirty and dangerous workplaces that are a threat both to the environment and to the labour forces that earn their living in them,” Mitropoulos added.

In what is an unregulated industry in many parts of the world, there is clearly a tendency for those who insist on higher standards to lose out—commercially speaking—to those who are less stringent.

India’s own ship repair facilities have seemingly fallen victim to such a trend, as attempts to introduce higher health, safety and environmental standards have resulted in a downturn at some of the leading facilities and a migration of business elsewhere, he said.

Speaking at 'The India Maritime Summit 2008' here, IMO Secretary General Efthimios Mitropoulos said the new law, 'The International Convention for the Safe and Environmentally Sound Recycling of Ships' will include regulations for the design, construction, operation and preparation of ships to facilitate safe and environmentally sound recycling, without compromising safety or operational efficiency.

The regulations will also establish an appropriate enforcement mechanism for ship recycling, including certification and reporting requirements, Mitropoulos said.

Mitropoulos said recycling of ships is largely an unregulated industry in many parts of the world, and the countries that insist on higher standards could lose out commercially.

'India's own ship repair facilities have seemingly fallen victim to such a trend, as attempts to introduce higher health, safety and environmental standards resulted in a downturn at some of the leading facilities and migration of business elsewhere,' the IMO secretary general said.

He said India's apex court also recently decreed rules similar to the IMO convention, which suggests that there will be no serious impediment for India to ratify the new treaty.

'The treaty, once ratified, will open up a huge global market of ship recycling in India,' Mitropoulos added.