'Dead ships' a security threat too? 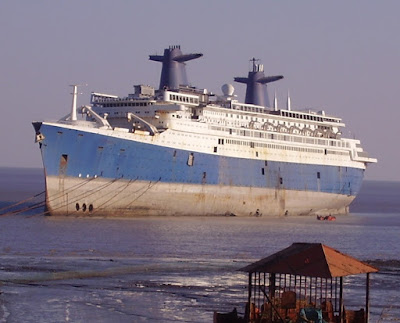 D-Company Hand in Most Ship-Breaking Deals in Alang, May Be Route To Land Contraband: Intelligence Report

NEW DELHI: The 'dead ships' coming to India under flags of convenience are not only an environmental threat but also pose a threat to India's maritime security. A confidential report of the naval intelligence has pointed out that the D-gang is involved in most of the deals going around in the shipbreaking business.

TOI had earlier reported on shipowners in OECD countries using small countries like Liberia and Tuvalu to circumvent international laws that prevent them from sending ships loaded with dangerous chemicals for dismantling to developing countries, such as India. The intelligence report has raised the issue of security threat arising from unregulated shipbreaking in India.

"The high stakes of profit margin, cheap labour, corrupt practices and a large floating population have made labour settlement at Alang (the biggest Asian shipbreaking yard, based in Gujarat) an ideal breeding ground for mafia and anti-national elements to indulge in nefarious activities almost unhindered," the report mentions.

TOI had reported on the controversial 'Blue Lady' aka 'S S Norway', the 2,000-seater luxury liner that was 'officially' sold to a Liberian company for a mere $10 before being bought by an Indian company for scrapping at Alang. "Cash buyers operate hand in glove with the end buyers and owners by under-invoicing a deal. The unmentioned amount is transacted through the hawala route making almost 40-50% metal trade illegal," the report adds.

With scrap steel prices shooting through the roof, the shipbreaking industry has become a small but important supplier of broken down steel and iron from the dismantled ships. "Apparently, a large number of cash buyers are Pakistani nationals based in London and the UAE. Due to large profit margins, the Dawood group appears to have invested heavily in cash buyers thus having a stake in most deals," the report warns.

Indian Naval Intelligence has also warned that the involvement of the D-gang and Pakistani nationals creates a distinct possibility that the shipbreaking industry has become a route for landing contraband and explosives.

The crew on board the dead ships as well as the escorting vessels (the dead ships have to be towed at times by another) have come under suspicion as well. There remains a possibility of the crew escaping scrutiny while landing and leaving Indian waters as well as during their stay in India. This, the security agency has pointed out, "can lead to clandestine collection of data, survey of seabed and coastal area, weather and meteorological data and for dropping and picking agents".

At present, 53 such 'dead ships' are beached at Alang in contravention of Supreme Court orders. The intelligence report mentions that the regulations allow such ships innocent passage through the entire stretch of Indian waters unscrutinised by the security agencies.

Interestingly, the naval report was submitted as part of a case in the SC on the environmental hazards of unregulated shipbreaking. The environment and forests ministry had gone on record to say that no intelligence agency had warned it of such threats specifically.

Anonymous said…
News indicates DaWood was taken by "secret" counter-terrorism operations back in August or September of 2007, confirmed to be in "missing" status in Nov 2007...

Where are the security reports that the forestry service has mentioned and what specifics do they document?

I researched this and have found a few forums and a couple websites that mention that the explosion was not actually unexpected and that the american investigation was intentionally misled, even a possible frame-up against the "D" and related parties like this huge site http://www.bluenorway.org says? (How could al-qaeda blow up an american cruise ship in america?)
6:10 PM

"Hickory Dicory Dock, US MOB is now on the Clock"

Guess where this one is headed, Mr Krishna?
7:54 AM

Mr. Gopal, I hope you have documents in the court at alang long before the terrorist americans get any louder. DieBold, Mr. Gore!
10:12 AM

Anonymous said…
I can appreciate the huge amount of manpower required to dismantle these ships, especially when it is done by hand. With that in mind, I am going to be working with government officials here in the U.S. to reduce the number of H1B Visas available. Hopefully, the task of disassembling these ships will go faster with additional workers to draw upon. A strong back is a terrible thing to waste.
12:01 PM