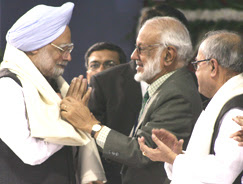 It appears that the 18 page order in the Hazardous Waste/Ship breaking/Blue Lady case [Writ Petition (Civil)] 657 of 1995 has banned the import of contaminated ships and has introduced a sent back clause in the order of 6th September, 2007 by by the bench presided over by Justice Arijit Pasayat and Justice S. H. Kapadia (Para 7, last sentence) reads, "The authorities in India can without the certificate at the stage of anchorage verify and come to conclusion that if the ship is contaminated same is to be sent back". But clearly the judges have not taken cognisance of the failure of the authorities in India to verify that the extent of hazardous materials like PCBs and radioactive material on Blue Lady.

Relying on the recommendations of Prof MGK Menon headed High Power Committee on Hazardous Wastes (HPC) that was part of directions of 14th October, 2003, the order dated 6th September, 2007 (paragraph 8) reads as follows:

8. In Research Foundation for Science Technology Natural Resource Policy v Union of India and Anr. (2005 (10) SSC 510) while dealing with the aspect of ship-breaking. It was noted as follows:

We accept the following recommendations of HPC:

“1. Before a ship arrives at port, it should have proper consent from the concerned authority or the State Maritime Board, stating that it does not contain any hazardous waste or radioactive substances. AERB should be consulted in the matter in appropriate cases.

2. The ship should be properly decontaminated by the ship owner prior to the breaking. This should be ensured by the SPCBs.

3. Waste generated by the ship breaking process should be classified into hazardous and non-hazardous categories, and their quantity should be made known to the concerned authority or the State Maritime Board.

4. Disposal of waste material, viz. Oil, cotton, dead cargo of inorganic material like hydrated/solidified elements, thermocol pieces, glass wool, rubber, broken tiles, etc. should be done in a proper manner, utilising technologies that meet the criteria of an effective destruction efficiently of 99.9 per cent, with no generation of persistent organic pollutants, and complete containment of all gaseous, liquid and solid residues for analysis and, if needed, reprocessing. Such disposed of material should be kept at a specified placed earmarked for this purpose. Special care must be taken in the handling of asbestos wastes, and total quantities of such waste should be made known to the concerned authorities. The Gujarat Pollution Control Board should authorise appropriate final disposal of asbestos waste.

6. The State Maritime Board should insist that all quantities of waste oil, sludge and other similar mineral oils and paints chips are carefully removed from the ship and taken immediately to areas outside the beach, for safe disposal.

7. There should be immediate ban of burning of any material whether hazardous or non-hazardous on the beach.

8. The State Pollution Control Board (of Gujarat and other coastal States where this ship breaking activity is done) be directed to close all units which are not authorized under the HW Rules.

9. That the plots where no activities are being currently conducted should not be allowed to commence any fresh ship breaking activity unless they have necessary authorization.

10. The Gujarat PCBs should ensure continuous monitoring of ambient air and noise level as per the standards fixed. The Gujarat PCBs be further directed to install proper equipment and infrastructure for analysis to enable it to conduct first level inspection of hazardous material, radio-active substances (wherever applicable). AERB shall be consulted in such cases.

12. The Notification issued by GMB in 2001 on Gas Free for Hot Work, should be made mandatory and no ship should be given a beaching permission unless this certificates is shown. Any explosion irrespective of the possession of certification should be dealt sternly and the license of the plot holder should be cancelled and Explosives inspector should be prosecuted accordingly for giving false certificate.

13. A complete inventory of hazardous waste on board of ship should be made mandatory for the ship owner. And no breaking permission should be granted without such an inventory. This inventory should also be submitted by the GMB to concerned SPCBs to ensure safe disposal of hazardous and toxics waste.

14. Gujarat Maritime Board and Gujarat SPCB officers should visit sites at regular intervals so that the plot owner know that these institutions are serious about improvement in operational standards. An Inter-Ministerial Committee comprising Ministry of Surface Transport, Ministry of Steel, Ministry of Labour and Ministry of Environment should be constituted with the involvement of labour and environment organizations and representatives of the ship breaking industry.

15. The SPCBs along with the State Maritime Board should prepare land fill sites and incinerators as per the CPCB guidelines and only after prior approval of the CPCB. This action should be taken in a time bound manner. The maximum time allowed should be one year.

16. At the international level, India should participate in international meetings on ship breaking at the level of the International Maritime Organization and the Basel Convention’s Technical Working Group with a clear mandate for the decontamination of ships of their hazardous substances such as asbestos, waste oil, gas and PCBs prior to exports to India for breaking. Participation should include from Central and State level.

17. The continuation or expansion of the Alang ship breaking operations should be permitted subject to compliance with the above recommendations by the plot holders.

18. That the above conditions also apply to other ship breaking activities in other Coastal States.

NEW DELHI: In a major ruling that upholds the right to life and protects people from the hazardous effects of contaminated ships sailing in for breaking, the supreme court imposed on Thursday a ban on the entry of ailing ships in the country.

It also ordered a complete ban on burning any hazardous or non-hazardous material on the beaches.

The 18-page judgment by a bench of justices Arijit Pasayat and SH Kapadia is a fallout of a long-pending petition by Research Foundation for Science, Technology and Natural Resource Policy seeking a ban on breaking the massive Norwegian ship Blue Lady at Gujarat’s Alang ship-breaking yard.

Most ship-breaking — nearly 90 per cent — is now done in Asian yards, including India, Pakistan and Bangladesh, because of low cost, poor conditions and lack of safety regulations.

India’s ship-breaking industry has had an annual turnover of Rs 25b.

Last year, only 73 ships were dismantled in Indian yards compared to an average of over 300 previously.

World’s largest ship-breaking yard at Alang in Gujarat employs up to 10,000 workers.

Nine people were critically injured and five killed when a major fire broke out February 17, 2006, on the ship ‘China Sea Explorer’ during its breaking at Alang.

Reiterating a series of recommendations by a high-powered committee and also adopted by the court in 2005, justices Pasayat-Kapadia asked the centre to formulate a comprehensive code incorporating these suggestions.

“Until the concerned statutes are amended, these recommendations have to be operative,” the judges said.

Court also directed that officials of Gujarat Maritime Board, state pollution board, customs, National Institute of Occupational Health and Atomic Energy Board should oversee arrangements for ship-breaking.

Court also directed these officials would authorise any ship-breaking.

NEW DELHI: In an order that is already taking on political hues, the SC has empowered the government to send back any contaminated ship that comes to India for breaking at Alang or any other ship-breaking yard in the country.

The Indian ship-breaking industry has an annual turnover of more than Rs 2,000 crore. Reacting sharply to the order, the ship-breaking association in Gujarat has reportedly threatened to approach the BJP state government against the order which the UPA had pursued in Delhi.

The order, leaving the controversial Blue Lady ship out of its purview, has put up other strict guidelines too, picking them up from an earlier report of the SC appointed committee headed by MGK Menon.

The court has ordered that the government formulate a comprehensive code and immediately incorporate these recommendations until the laws are modified and aligned with the court orders.

The continuation and expansion of Alang and other ship-breaking yards across the country shall be permitted, subject to the compliance to these directions by the ship-breakers.

The order leaves little space for the authorities to allow ship-breaking even if ship owners do not provide details of contaminants on board.

Going a step further, the court has reiterated that India should participate in relevant international conventions with the clear mandate for decontamination of ships for hazardous substances such as asbestos, waste oil, and PCBS prior to export to India for breaking.

Until further orders, the court has asked the state pollution control boards, customs department, the National Institute of Occupational Health and Atomic Energy Regulatory Board to oversee the entire arrangement at the shipyards.

Anonymous said…
If you always write interesting, I will be your regular reader. skin care Read a useful article about tramadol tramadol
5:52 AM